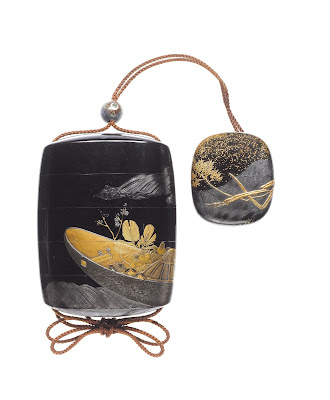 An 19th century roiro lacquer four-case inro by Shibata Zeshin has made the world record price at Bonhams for on inro in an international sale, selling for £162,000 in Part 1 of the Edward Wrangham collection, one of Europe’s most important and comprehensive private collections of Japanese Gentleman’s accessories. The overall sale raised £2million with 94% of lots sold by value. Many of the coveted inro and netsuke sold for over ten times their pre-sale estimates to major international collectors, including some from the USA and Japan, who were all vying for the collection. Four out of the top ten lots comprised works by Shibata Zeshin, one of the most famous painters and lacquerers of the Meijii Period. A small lacquered fubako (document box and cover) skilfully rendered in a variety of textures sold for £74,400, over ten times the pre-sale estimate . A rare grey and silver lacquer and kiri-wood four-case inro depicting a crescent moon amongst swirling clouds, sold for £66,000 against the pre-sale estimate of £2,500 – 3,000. The final work by Zeshin to be included in the top ten lots was a large single-case inro and kozuka (a handle that holds a small blade) that sold for £38,400.