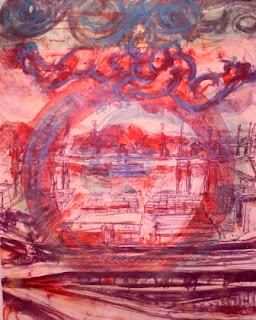 New York-based Singaporean artist Jimmy Ong is primarily known for his black and white charchoals of human figures and large landscapes recalling earlier days when Singapore was still a British colony. His new paper works at STPI are a colorful departure with bright purples, yellows and greens. The exhibition is titled SGD as Ong reflects on the Singapore currency note, exploring the Tembusu tree on the $5 bill, offering the face of Lee Kuan Yew, the first Prime Minister of Singapore and regarded as a father figure by many, as an alternative to the current face: Yusof Ishak, the first president of Singapore, who graces all current bills. For me the most interesting work (which I would have bought had they not been snapped up) is a view of a busy Keppel Harbour that he likes to compare to the view of the Singapore river as it appeared on the $50 note (these works are in various colors, with some working better than others). Towering over the harbour is a cloud-like female figure, while at the bottom, the words Goddess of No Poverty are scribbled - a nice reflection on the booming economy and a play on the acronym GNP.