Christie’s Hong Kong Fall sales of Important Ceramics and Works of Art will take place on December 1 and offer three important single-owner sales, amonts many other important pieces, worth a total in excess of HK$555 million (US$71 million). 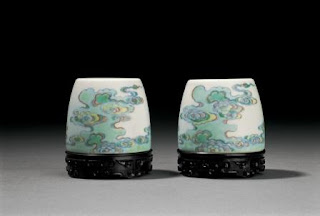 There will be fine Chinese ceramics from the Greenwald Collection, featuring  exquisite Ming and Qing Imperial porcelains. Gerald Greenwald has been a passionate collector of Chinese ceramics for more than thirty-five years, during which time he has amassed a remarkable collection of fine and very rare pieces. Initially captivated by the beautiful porcelains of the Ming and Qing dynasties, his passionate interest rapidly evolved and as he became more deeply fascinated by Chinese ceramic art history, he gradually broadened his scope to include ceramics from earlier periods. The result is a most remarkable collection of porcelain. The forthcoming sale is comprised of 32 Imperial ceramics from the Ming and Qing dynasties, ranging in estimates from HK$80,000 to HK$5 million.
Leading the collection is a very rare pair of doucai water pots from the Yongzheng period. These charming water pots are finely painted and enameled around the sides with swirling clouds circling the base in delicate tones of green, aubergine, blue, yellow.Most interestingly, the clouds are used here as a symbol of good fortune, for the word for cloud in Chinese is yun, a homophone for the word fortune. Previously in the collection of the Tsui Museum of Art in Hong Kong, these water pots are elegant examples of the decorative technique known as doucai, in which underglaze-blue outlines are filled with colored overglaze enamels. 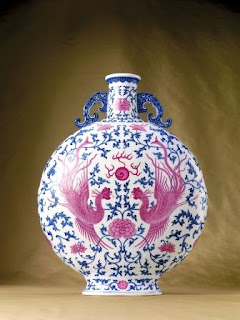 The second collection is that of Walter and Phyllis Shorenstein and include examples of Chinese glass, imperial porcelain and jade of particular distinction. Phyllis Shorenstein was a passionate collector of Chinese glass and the impressively comprehensive collection that she amassed is one of the most admired and comprehensive collections in private hands. Both Walter and Phyllis Shorenstein will be remembered for their immense contribution to the city of San Francisco’s cultural, educational and social life, as well as their generous and thoughtful charitable works. In 1966 Phyllis became one of the founders of the San Francisco Asian Art Museum. The sale offers a magnificent pink-enamelled blue and white Qianlong moonflask. Decorated with phoenixes amongst flower scrolls in underglaze blue and overglaze pink enamel, it is a rare and superb example that is as a testament to the outstanding artistry and technical skill of the craftsmen employed at the imperial kilns. Each phoenix is exceptionally finely rendered, making this moonflask one of the most striking examples of the few porcelains known with this combination of colors and techniques. The pair of this vase is in the Matsuoka Museum of Art, Tokyo.
The third collection is that of Alfred Morrison and is also known as the Fonhill House collection, one of the most important 19th century English collections of Chinese art. Alfred Morrison (1821 – 1897) was the second son of the wealthy textile merchant James Morrison, who was believed to be the wealthiest commoner in 19th century England. After his father’s death in 1857, Alfred inherited the Fonthill estate and devoted much of his inheritance to collecting extraordinary art treasures. Set in the Wiltshire countryside, Fonthill was the perfect backdrop for him to present his magnificent collection, including a significant group of engravings and Chinese art, with a particular emphasis on Qing 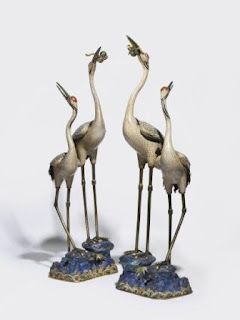 porcelain and enamel wares. The Fonthill Collection is especially famous for its exceptional imperial cloisonné and champlevé enamels on metal and for its superb imperial enameled porcelains. Leading the collection is a magnificent and extremely rare pair of imperial cloisonné enamel double crane censers from the Yongzheng period (1723-1735). Representing peace and longevity, these magnificent cranes are auspicious creatures that may have flanked an Imperial throne. Unusually large and exceptionally detailed, these magnificent works of art appear to be unique in having two cranes in each group rather than being a pair of single cranes. Indeed, all extant cloisonné censers and candle holders published from the palace collections have only a single crane on each base. It is thought that these crane censers may have been commissioned by the Prince Hongli (later Emperor Qianlong), probably as a birthday gift for his father Emperor Yongzheng. The peaches held by the taller cranes are symbols of longevity - a fitting choice. Meanwhile, the beautifully depicted bamboo spray symbolizes integrity, a virtue that was particularly valued by the Yongzheng Emperor.