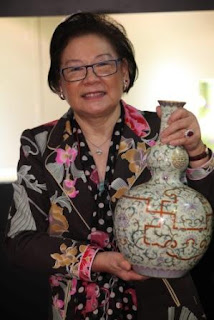 Sotheby’s Chinese ceramics and works of art auction is going extremely well. The first day of the two-day sale brought in $148 million for 35 lots of imperial treasures, well in excess of the estimate of $43-61.4 million. The yellow-ground famille-rose double-gourd vase seal with the mark of Qianlong was bought by renown connoisseur Alice Cheng (photo) for $32.4 million, a world record for any Chinese work of art or porcelain at auction. A famille-rose floral medallion bottle vase enamelled in the Palace Workshops brought the exceptional price of $18 million, while a massive imperial white jade “xintian Zhuren” seal sold for $16 million, another world record for an imperial seal and white jade at auction. Finally a Beijing enamel gold teapot and cover with the mark of Yongzheng sold for $5.3 million, a world record for any Beijing enamel ware at auction. Enough to make you dizzy!