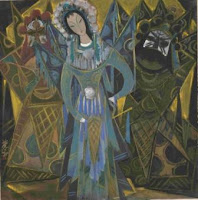 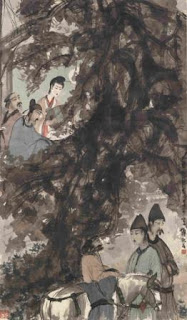 One of the highlights this season is Fu Baoshi’s The Song of the Pipa Player, based on the poem of the same name written in 816 AD by Bai Juyi, a well-known Tang dynasty poet and official. A tightly composed, dramatic work that exudes a pensive and melancholic tone, The Song of the Pipa Player shows Fu breaking through the traditional notions of Chinese painting to create something exciting and different while remaining culturally significant with its undercurrents of political commentary. There is also one of Lin Fengmian’s Opera Figures, as well as a beautiful Flying Deity by Zhang Daqian, one of the 276 works he painted during his two years in recording the Dunhuang cave temples and a cat by Xu Beihong.