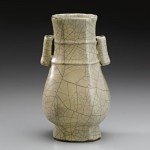 Second day of the sales of Sotheby's Asia Week and the results are mixed. The Fine Chinese Ceramics and Works of Art raised $15.17 million, just below the high estimate but it was 61% sold by lot (ie 91 lots did not sell!) . Which means that (again), Chinese buyers have not been jumping up and done on everything. Indeed, the two top lots were bought by an American and a UK buyer! Bidding was enthusiastic for some pieces. A 'Ge' Octagonal Vase (Ba Fanghu) soared above the high estimate to fetch $1,762,500 (est. $400/600,000). A paintings by Yao Shoo, 'Landscape With Boats', also more than doubled the upper estimate to sell for $1,082,500 (est. $300/500,000) and an Important Imperial Painting From The Set Of Seventeen Paintings Commemorating The Victories Over The Muslim Rebellion sold for $992,500 (est. $120/150,000). But a lot of lots also went down crashing..
Auctions Chinese art Sotheby’s