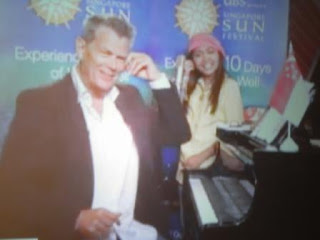 In the last three years, the Singapore Sun Festival has established itself as a must-attend festival for music lovers. This year, it doesn't disappoint with Jose Carreras, but it's also slightly shifting its focus toward a more adult contemporary-cum-jazz-cum-world music, not quite dissimilar to the Mosaic Festival. The line up is fab with George Benson, Natalie Cole, The Creole Choir of Cuba and David Foster (Mr Hitman) and Friends. During the press preview, Foster hooked up via satellite (photo) and he performed on the piano with one of his "friends" Charisse; despite the poor sound her belting of Whitney Houston's hit song was amazing. Foster, who has 15 Grammies under his belt, will be touring Asia (Jakarta, Manila, Bangkok). He had the audience in stiches talking about how he selects his songs for the concerts depending on which ex-wifes he wants to pay alimony too... he's been married 3 times. And did I mention Sharon Stone will also be there, she'll be participating in three events, including a public interview. Can't wait!