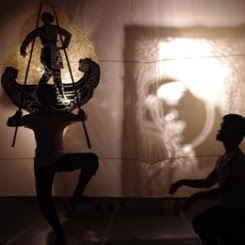 One of Thailand foremost dancers and choreographers Pichet Klunchun will premiere Nijinsky Siam at the soon-to-be closed Victoria Theatre on Wed and Thurs this week. In 1900, a Royal Thai Dance troupe performed in St Pertersburg , watched by Sergi Diaghilev, the impresario of The Ballet Russes and set and costume designer Leon Bakst. Ten years later, the famed dancer Nijinsky performed at the Opera de Paris Danse Siamoise a ballet inspired by Thai traditional Khon dance though it is yet unclear whether he had actually seen the performance 10 years earlier. Still there are photographs and paintings left of Nijinsky in a Thai dance costume striking pauses seemingly replicating traditional Thai dance postures and gestures, although often reversed because of their difficulty for a Western dancer. Now it’s the turn of Klunchun to enter in a dialogue with Nijinsky, thanks to the use of nang yai (large-scaled shadow puppets) showing his pauses. The choreographer says it was impossible to recreate Nijinsky’s dance, so he’s exploring his own interpretation of what might have happened. This all sounds very intriguing and the performance is already booked to travel to four cities in Europe this summer for various festivals.
Asian Performing Arts Singapore Thai Art