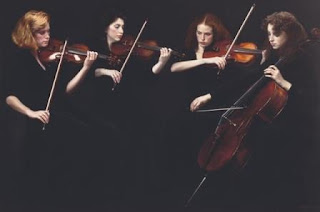 After a slightly rocky start, where it failed to sell its top lot in the first day’s sales of classical Chinese paintings, Christie’s is back on track with a “white glove” auction (ie 100% sold) for its evening sale of Asian contemporary art and Chinese 20th century art on Saturday. While its first day of sales had raised $54.8 million, with 84.2 percent sold, the ink-on-paper album by painter Shitao that was tipped to fetch HK$120 million ($15 million) did not sell. But on Saturday, the evening achieved $39 million, three times the estimate with a completely packed room and fierce bidding. The top lot was 'String Quartet' by 20th Century artist Chen Yifei, a work which broke a new auction record at $7.85 million. Another two records were achieved when 'Chapter Three "Wreck"' by Japanese artist Tomoko Konoike sold for $264,504, and a work entitled 'Shintenno (Jikokuten, Zochoten, Tamonten, Komokuten)' by Japanese artist Akira Yamaguchi sold for $239,096. Interestingly, the success of Andy Warhol's 'Mao', which sold well over the high estimate at $850,008, indicates that nascent demand for top quality Western contemporary art amongst Asian collectors has potential to grow.
Asian Art Auctions Chinese art Christie's Japanese Art