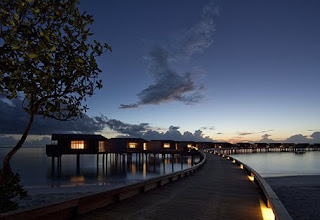 Singapore-based architect Chan Soo Khian rose to pre-eminence with his distinctive contemporary reinterpretation of traditional tropical architecture. His firm was named one of the 10 Design Vanguards, reshaping the world’s architectural landscape in 2003 by Architectural Record, the prestigious publication of the American Institute of Architects. Chan has also won the Royal Institute of British Architects Worldwide Award in 2005 for the Lincoln Modern, a Singapore condominium, and the Chicago Athenaeum 2006 International Architecture Award for his work on the Heeren Street Shophouse in Malacca. “My work comes from a synthesis of different Asian styles, yet with an understanding of Western style, which is what I mainly studied at university,” the architect told me during an interview for a piece published in Fah Thai’s March edition. Two of his recent projects – the luxurious Alila Villas Hadahaa in the Maldives (Photo), which opened last August, and the Alila Villas Soori in Bali, which opened in November – follow his ideology of integrating design with the surrounding nature.
Architecture Luxury Published stories Singapore Travel