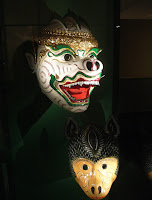 With numerous heroes and villains and its powerful feel-good message of good triumphing over evil, the Ramayana has been one of the great epic poems of Indian culture for centuries. Originally attributed to the Hindu Sanskrit poet Valmiki, who lived about 400 B.C., the story has been retold and adapted over time by poets, scholars and everyday storytellers

It has also captured the imagination of many other cultures beyond its origins in India. In Southeast Asia, scenes from the Ramayana can be found in places ranging from Prambanan, a 9th-century Hindu temple compound in Yogyakarta in central Java, Indonesia, to the magnificent 12th-century Angkor Wat in Cambodia.

“Ramayana Revisited: A Tale of Love & Adventure,” an exhibition that is running at the Peranakan Museum, Singapore until Aug. 22, underlines the cross-cultural power of the popular epic.
For full story: www.nytimes.com/2010/02/04/arts/04iht-RAMAYANA.html