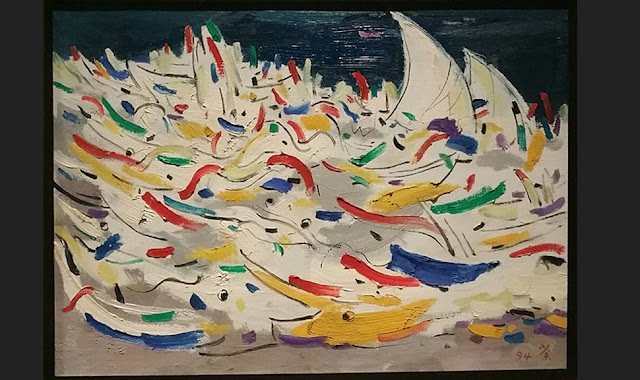 Widely considered as one of the great Chinese ink masters of the 20th century, Wu Guanzhong was also an accomplished oil painter, spending the first part of his career fully dedicated to the medium. A major new retrospective opening on Thursday at the National Gallery Singapore, ‘Beauty Beyond Form,’ provides a comprehensive insight into Wu’s prolific career, presenting examples of the large ink works he started producing in his 50s along with some of his earlier oil paintings.
Wu, who died in 2010, donated 128 works to the Singapore Art Museum. That 2008 donation comprised primarily ink works, but for this exhibition, Low Sze Wee, director of curatorial and collections at the National Gallery Singapore, decided to reach out to other museums and private collectors in order to showcase more fully the range of Wu’s practice. Of the 80 artworks on display, 22 are on loan from key arts institutions in China and Hong Kong including the National Art Museum of China, China Art Museum, Shanghai, Hong Kong Museum of Art, Zhejiang Art Museum, and Nanjing Museum.

“The premise for this particular show was to be a very strong retrospective covering five decades of practice and we didn’t want to reduce ourselves to the work we have in our collection,” Low explained, “we wanted to bring the best together.”

The artist was a forerunner in the style of synthesizing Chinese art and Western modernism, impregnating his ink paintings with western aesthetics and his oil paintings with ink aesthetics; and amongst the masterpieces on display are ‘Hometown Morning (1960)’, ‘A Mountain Village of Guilin (1973)’, The Hometown of Luxun (1976)’, ‘Mulberry Grove (1981)’, ‘Two Swallows (1981)’ and ‘Delicate Reflection (2009)’ among many others.

“He was very interested in indigenizing or localizing oil painting, which was considered a Western medium, to make it more relevant to a Chinese audience. So his color palette is often neutral, the brush strokes are more pronounced,” Low explains, adding, “Similarly, from the 1970s onward he found ink more productive and the new quest in his life was how to modernize Chinese ink painting, which was regarded somehow as stagnant. Instead of traditional Chinese landscapes where the viewer can meander along a path to the top of the mountain, his were more about using very bold colors which he would drip, for splash effect, almost like a Jackson Pollock work.”

Born in 1919, Wu studied at the National Arts Academy of Hangzhou under Lin Fengmian, a pioneer of Chinese modern painting, before moving to Paris in 1947 to study at the Ecole National Supérieure des Beaux Arts. Many of the early Paris works were destroyed by the artist himself at the onset of the Cultural Revolution, “because he was quite fearful to be persecuted,” Low said.

“After returning from Paris, he didn’t subscribe to the Social Realism school of thought. He was more interested in formal experimentation like post-impressionism and he was heavily criticized for now toeing the line. The few works you have here, that are extremely rare, survived because he opted to depict peasants, which was regarded as an acceptable subject matter for the time,” Low explains.

During the Cultural Revolution, Wu was sent to the countryside to be “re-educated.” Between 1966 and 1972 he was banned from painting and writing, but when he was once again allowed to paint, he restarted with oil on board, with innocuous flowers and fruits, though some see a depiction of his own combative spirit in his wild flowers paintings.

When Wu returned to Beijing in 1973 he turned to ink painting, and although he was again criticized for his more avant-garde approach he also started to find favor with collectors, in particular some in Singapore who helped sustain his practice. “Today, Singapore is probably the place where you will find the most Wu Guanzhong paintings outside of China, in both public and private hands,” Low notes.

All his life, Wu maintained he was not an abstract painter, but the last part of the exhibition is actually dedicated to his abstractions. However, “he always gave his painting a title. For him it was not about abstract lines and forms; whatever he painted he linked back to reality. He always likened his painting to the act of flying a kite, the kite is the artwork, but in order to fly, for the public to understand, it has to be tied to the ground.”