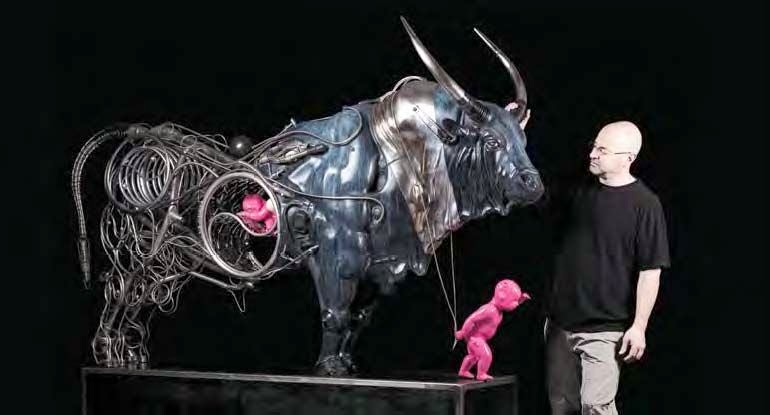 Half human, half machine, the hybrid bronze sculptures of Pierre Matter offer a powerful and intriguing visual with the French sculptor using scrap metal and old engine parts to create characters that would fit in a dark sci-fi world.
A current exhibition at Opera Gallery Singapore is a good opportunity to discover the evolution of the artist’s style over the last 10 years, with the more recent inclusion of a pink baby inhabiting Matter’s hybrid world.


“The common thread throughout the year remains the hybridization of humans and animals and machines, and the impact of high technology on an organic world,” explains the artist, “I believe it’s our every day reality now. I’m not only fascinated by this omnipresence of science and machines in our daily life, but I’m also worried about it. My vision is one that is actually rather dark, because I believe it will eventually completely permeate our life and being. When you see what Google is doing with its prototype eye contact lenses to measure blood glucose level, it doesn’t bother the younger generation which was born with this technology, but it actually really scares me.”
Turned to sculpture after a failed attempt at comics strips, Matter started exploring this concern in 1997. “I worked on comics for four years and it didn’t work out. I didn’t move on to (this type of) sculpture immediately, I first worked with stones creating bas-relief. And then I moved on to using metals, and then it happened in 15 days and it felt right. It just happened,” he recalled.
The pink baby in lacquered bronze has started to appear in the artist’s work in the last three years, often confronting the hybrid animals, exploring their constituent parts, or dominating them. “I find the image of a baby more powerful, but it’s all about confrontation of that world,” Matter explains.