An interview with Jacques Villeglé on his Ripped Posters 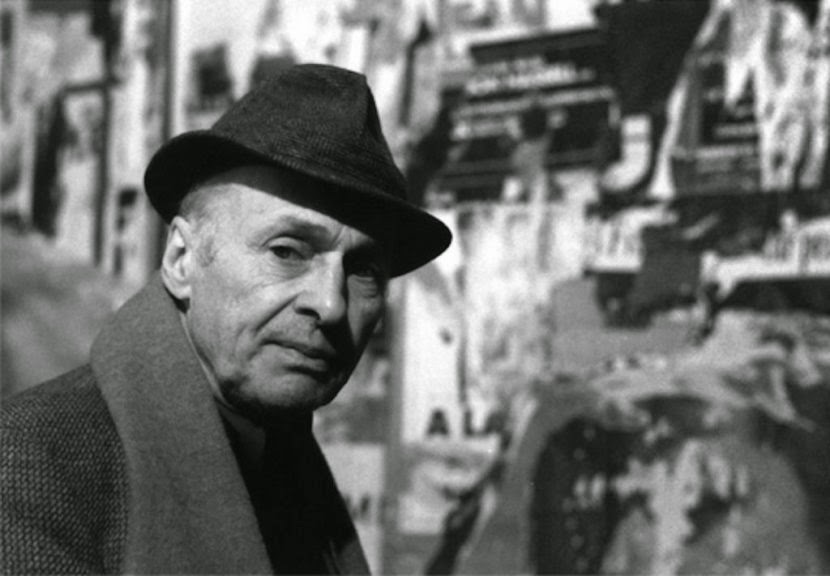 Back in 1949, in Paris, Jacques Mahé de la Villeglé and his friend, Raymond Hains, started to take ripped advertising posters they saw in the streets, removing them from the billboard supports whole and gluing them back on canvas. This ‘décollage’ made the works a witness of time passing by, offering fragmented insights to society’s earlier concerns and tastes.
While Villeglé’s early works eschewed imagery to focus on typography, he started to focus more on colors and shapes in the 1960s, at a time when he launched, with Hains and Yves Klein, the New Realist movement that appropriated consumerism products very much like the Pop Art movement in the United States.
A keen observer of urban art and society, Villeglé never wavered from his appropriation technique and each of his works bears the name of the street where the poster was collected. For Villeglé the posters are as much witnesses as they are actors in their environment, and while he makes the choice of the framing of the final image or memory, he is completely absent from the actual execution of the works, which have been created by an anonymous collective, which is why he describes his ripped posters as “lacères anonymes.”
Like an urban archaeologist, Villeglé categorizes his works under various themes like painting, politics, events, transparency (posters lacerated by the rain), etc.
The 88-year-old artist, who enjoyed a major retrospective at the Centre Pompidou in Paris in 2008, is now having a mini-retrospective at Partners & Mucciaccia in Singapore, running until February 8. The exhibition includes about 50 works spanning his career from the 1960s to his latest alphabet works that use socio-politics signs to create a new language. While recently in town, he talked me for an Blouin Artinfo story:

How did you get interested in street posters?
At the time the French art scene was dominated by abstract painting; but for me, abstract art reflected the sensitivity of the artist while I was more interested in reflecting a collective sensitivity. In the 1930s, the poster was called the “journal (newspaper) of the street,” something that really reflected society. And what I think I realized at the time was that the posters, as an art form, were always going to evolve and so there would always be something new to explore. In the 1950s for example, photography was not used in posters, it was still drawings. Today, you don’t need to know how to draw to do a poster, you need to know how to use a computer, how to manipulate an image.
What was the reaction to those first works?
Actually, many people thought it was a continuation of collage and Cubism, but that was a misunderstanding of what I was doing, as it’s actually the completely opposite technique. So I wrote an article in 1958, “Des Réalités collectives.” (The text was later used as a basis for the first Nouveau Realisme manifesto).
Did you actually tear the poster yourself?
As little as possible. The idea was really to take what was out there in the street and basically just select a section of it and frame it. All the work was really done by someone else, time passing, or the weather. But I didn’t want the work to have a political context, so when there was the face of a politician, because there used to be a lot of political billboard poster in France, I would tear a piece off so they would not be recognizable.
Did you ever get into trouble?
Well, I remember taking some political posters from the Communist Party. The militants weren’t too happy about it and I had to explain that I actually hadn’t torn anything; it was like that when I had found them. Then when I told them the work would end up in a museum they agreed because I made their history go into a bourgeois museum. A few times the police asked me what I was doing and I’d show them I was taking a billboard poster which was already torn. In fact I was cleaning up. They didn’t really quite understand, but they didn’t take me to the police station.
Are you still working today?
I had to stop with the billboards in the early 2000s. It was just becoming too demanding, physically. The last work that I created was for my 80th birthday celebration. Someone actually used a photo of me in different colors and then glued the posters over one another and then invited people to rip it off. He just gave me the result and I frame it. I think that was really nice. Now, I still create, but mainly drawings. Back in the late 60s I created this alphabet after I saw signs, like the three arrows of the Socialist party in Germany, to spell out NIXON on a billboard. He was coming to see Charles de Gaulle. It’s an ‘évolutif’ (evolutionary) alphabet, because for example the Euro sign didn’t exist at the time.
What else do you have planned right now?
I’m part of an exhibition on Les Affichistes at the Musée Tinguely in Basle that runs until mid-January, and then it moves on to Frankfurt’s Schirn Kunsthalle in February.