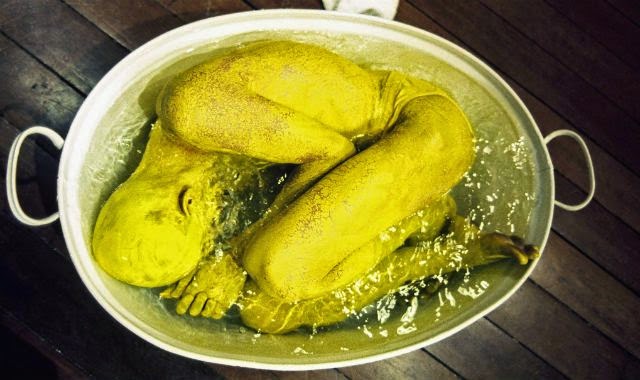 The Southeast Asian art scene will be relatively well-represented at Art Basel Hong Kong 2014, with a selection of art galleries championing artists from the region.

Works on offer will typically be primarily by artists well known to fair goers from the region, such as Fx Harsono, Yunizar, Rudi Mantofani, and Eko Nugroho, along with Jakkai Siributr.

Interestingly, some of these works will be presented by galleries that are not based in Southeast Asia, showing the increasingly far reaching international spread of the region’s art scene.

Singapore gallery Yavuz Fine Art is bringing sculptures by Jakkai Siributr, while Ipreciation is presenting a mini-retrospective of performance artist Lee Wen (who will also have a major installation in Encounters (see story here), including his controversial Yellow Man series and his fun Strange Fruit series.

FOST Gallery will be presenting works by Sookoon Ang whose films 1to9 and Exorcize Me have also been selected for inclusion in the evening film program .

Ota Fine Arts will have a beautiful, oil on canvas work by Ay Tjoe Christine, while Gajah Gallery is offering some unusual Yunizar bronzes.

Galeri Canna will be championing the works of Entang Wiharso and Fx Harsono with several pieces by these two major contemporary artists from Indonesia while ROH Projects is dedicating its booth to Syaiful Aulia Garibaldi.

Silverlens will be flying the Filipino flag with works by Luis Lorenzana, Maria Taniguchi (who it also presented at Art Basel in Basel last year), Patricia Perez Eustaquio and Pio Abad.

Finally, CUC Gallery of Vietnam will be the first Vietnamese gallery to participate in the fair, doing so as part of the Insight sector. It has opted to present abstract works by Nguyen Trung, one of the more established contemporary painters in Vietnam. Trung uses a cascade of signs in in large monochrome canvas to give them a mysterious cosmic dimension.-

as for published on Blouinartinfo.com