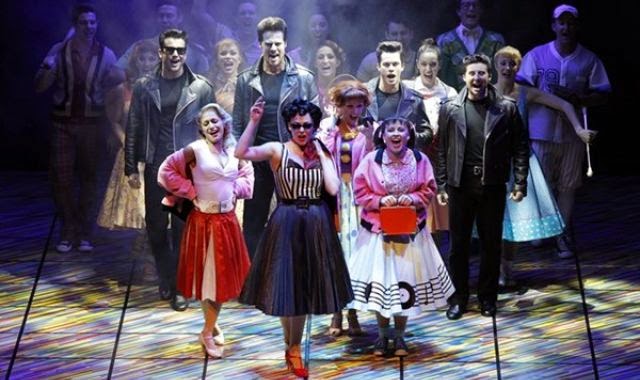 First it was a raunchy Broadway show, then six years later in 1978 it became the highest grossing movie-musical with John Travolta and Olivia Newton-John. With hits like Summer Lovin’, You’re The One that I Want, and Grease Lightning, which are still playlist favorites, Grease has returned to the stage and a toned-down version of the movie is currently showing in Singapore.

Set in 1959 in the fictitious Rydell High, the rom-com-musical revolves around high school students and their usual angsts (first loves, peer pressure, teenage pregnancy, future plans, etc). Over the summer, Danny Zuko (played by Stephen Mahy) fell in love with Sandy (played by Gretel Scarlett), but now that he’s back at school amongst his gang he’s finding it hard to reconcile his love for someone so clean cut given he has a bad-boy rep. to maintain.

Much of the 1950s pop culture drama seems quaint by today’s standards, but the movie’s songs have lost none of their punch ("You know that ain't no shit, we'll be getting lots of tit!" sung by leather-clad rockers around their "pussy wagon" automobile isn’t exactly a bubble-gum lyric).

Grease, now playing at Marina Bay Sands, will mainly appeal to the generation that grew up with the film and listened to the hits from the soundtrack on the radio. They will no doubt be happy to overlook the short-comings of the plot and cartoonish characters to catch a musical whiff of their youth and all the memories the catchy music brings back.

The current production has a strong dance ensemble, and Scarlett as Sandy can definitely belt out a tune — her ‘Hopelessly Devoted to You’ is excellent — while Mahy as Danny has the audience in his palm with his goofy antics. But the lack of chemistry between the two leads means you never really believe the love story or care about its resolution, and the director’s decision to end with only one character making the effort to “change” to win their partner over (instead of the two compromising) was unsatisfactory, even for a “period piece.”

The show is fun though and audience members will be tempted to join in and sing along so hope you are sitting next to someone who can hold a tune.

GREASE is running at the Marina Bay Sands until May 18.

As first published on Blouinartinfo.com