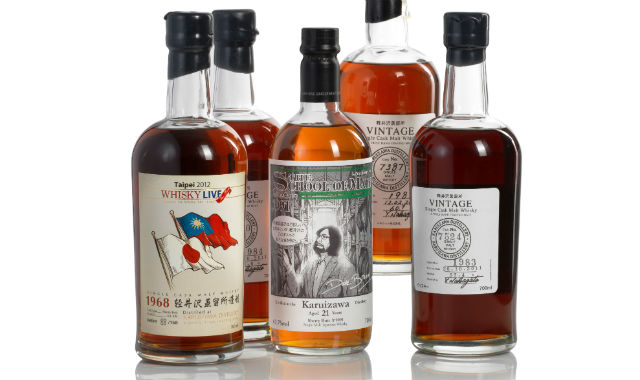 Productions of single malt whisky at the Japanese Karuizawa and the Hanyu distilleries stopped in 2000. This has made bottles of their whisky increasingly rare on the market, and more valuable at auction.


“The prices have been increased 100% on some of the early release, and have certainly room to appreciate further,” says Daniel Lam, a wine specialist at Bonhams Hong Kong, “The scarcity stirs up demand, and its quality fascinated many whisky drinkers who look for any of these bottles.”
On May 23, Bonhams’ Spring Fine & Rare Wines, Cognac and Whisky Auction in Hong Kong will include several lots of these rare Japanese whiskies that are bound to attract some interest from in-the-know collectors. The auction carries an overall estimate of HK$12 million and will include 30 bottles from the two distilleries from a Hong Kong collector.
Whisky production in Japan began around 1870, though the first commercial production dates back to 1924 with the opening of the country's first distillery, Yamazaki by Shinjiro Torii, the founder of Kotobukiya which later became Suntory.
According to Lam, Torii choose the location, in a suburb of Kyoto, because the area was famed for having excellent water. The legendary tea master Sen no Rikyu also built his tearoom there.
“Broadly speaking the style of Japanese whisky is more similar to that of Scotch whisky than Irish, American, or Canadian styles of whiskey,” notes Lam.
“For these two distilleries, the style of their whisky is reminiscent of the well-integrated sherry matured single malt in Scotland. Interestingly both distilleries were highly praised by world-renowned whisky connoisseurs and critics,” he adds.
The Karuizawa Distillery was established in 1955 in the foothills of Mount Asama, an active volcano, and the low temperature and high humidity there were seen as ideal for whisky production. The influential whisky critic Dave Broom in his “The World Atlas of Whisky” wrote: “It's like a throwback to a mostly forgotten Scotland. Yet in taste Karuizawa could only be Japanese. There is a depth and intensity of focus to its malts — resinous, scented with cardamom, thick with beeswax, spotted with blood — that only Japan can produce."
Other highlights of the sale include a bottle of Macallan-1946-56 year old Masters of Photography series by Irish photographer Albert Watson, complete with a one-off signed platinum print; Macallan Royal Marriage editions; and a Louis XIII Black Pearl cognac.