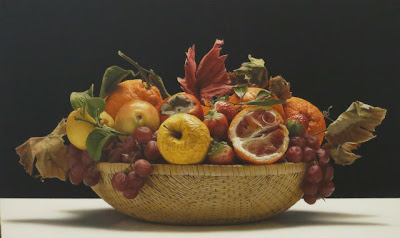 There is more than meet the eye to Luciano Ventrone’s realistic still life compositions. In fact, there is a lot of visual trickery in the works of the Italian painter who has mastered the art of realism.


First, the artist uses unusual artificial lighting on his subjects from different angles, thus creating various different shadows that he incorporates to distort reality. Second, Ventrone plays with detailing, inserting for example tiny veins on fruits that are a pure figment of his imagination, yet still look natural.
In fact, while many art critics have called him a hyper-realist painter, Ventrone sees himself more as an abstract painter. “People may just see still lifes, but for me they are a way of representing human situations. In fact if you consider the titles, you will see anthropocentric symbolic recording, such as the fight, the party, the businessman. There is something more than a basket of fruits,” the 71-year-old said through an interpreter.

“I want to teach viewers to look at reality with a different eye, to look beyond reality,” he added at the opening of his exhibition, “Sui generi/s,” at Partners & Mucciaccia Gallery in Singapore.
The works, all of which are for sale, came to Singapore from an exhibition at the Musei di Villa Torlonia, in Rome, that was curated by Cesare Biasini Selvaggi.

The Singapore gallery exhibition presents 50 works dating from 2007 to 2012, mainly still lifes of fruit baskets and flower bouquets, along with a few sensual female nudes and marine landscapes. Paradoxically, while the marine landscapes show nature at its most chaotic and lively, Ventrone exercises complete control in his still lifes. He tends to favor very orderly, almost geometric composition with nothing in the foreground that could distract, and always paints his subjects against a neutral background of black or grey that enhances their colors. His signature style is characterized by brilliant lighting and meticulous detailing.

Ventrone is at his best when representing fruits and vegetables, where he inserts a bit of chaos and life in the composition, while his round flower arrangements are perhaps a bit too bridal.

His technique, which involves sometimes using a one-hair brush, is impressive and his creative process is interesting — after organizing the composition of his subject, his wife, who is a photographer, will take some shots. The artist then projects the photo onto a canvas to create the outline. But as the painting progresses, the artist moves away from the photograph, preferring to paint the rich colors from memory.

Ventrone studied art at Rome’s Liceo Artistico and then enrolled in an architecture program in the mid-1960s. He started his artistic career focusing on abstraction, and only turned toward figurative painting in the early 1980s. “There is an umbilical cord that connects all the paintings that he’s made in the last 50 years,” explained Selvaggi, “He didn’t decide to go figurative at one point. It came as a natural evolution and in many ways, he still sees himself as an abstract painter.”

Ventrone muses that most of his life he has had people telling him figurative style was dead and the future was video and installation. But as he celebrates his 50-year career as an artist, Ventrone continues to prove there is still room for his figurative style.

As first published in sea.artinfo.cm