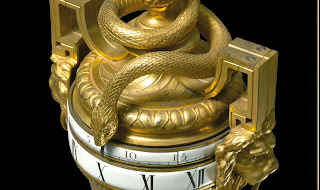 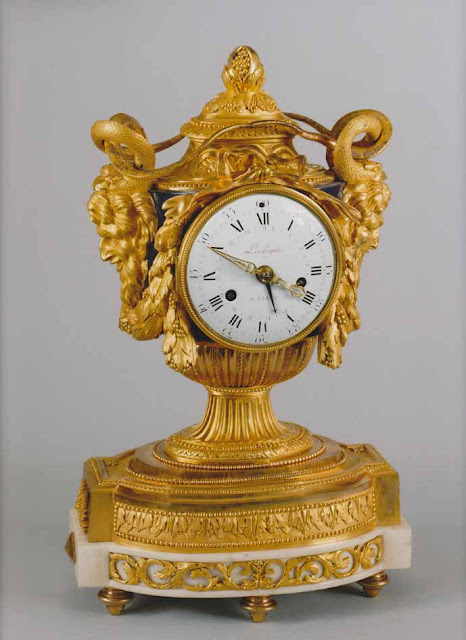 Amongst the new pieces is a rare Louis XVI ormolu and blue enamel mantel clock, attributed to master founder Robert Osmond, who had worked for major clock makers of his time such as Julien Le Roy, Jacque Lepaute and Robert Robin. The gilt bronze clock, which houses a movement signed Lechopie, takes on the shape of an elaborately decorated vase. Two masculine masks and draped foliage and garlands flank its dial, while a slim snake (a symbol of longevity) rests atop the piece.

Another small Louis XVI gilt bronze clock, signed "Lepaute" with interesting rotating dials, also has a serpent coiling around the top of the clock with its head resting right above the rotating dials, his tongue indicating the time.

Mikael Kraemer of the Parisian gallery said a similar clock can be found in the Zahringer Museum of Baden-Baden and another is in the Hamilton Palace Collection, but added 18th century pieces with snake pieces are fairly unusual.

The exhibition also includes a small, two-arm chandelier decorated with snakes, as well as a carved console with moulded open work, dated around 1720 and re-gilded with gold leaf, which is richly decorated with an Asia theme including dragon, phoenix, chrysanthemum, and four water snakes embracing the x-shape stretcher under the console.

The new exhibition is slated to continue until the end of April.

AS first published on sea.artinfo.com
Singapore