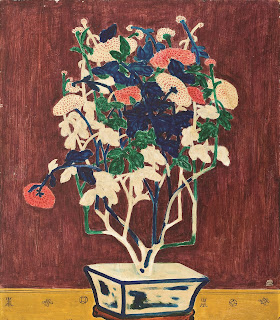 Highlights included Sanyu’s Potted Chrysanthemums, which sold for $3.96 million (a touch above its estimate of  $2.6 – 3.8 million, and Chu Teh-Chun’s Complexité Hivernale, which sold for $2.8 million to more than double its presale estimate.

In addition to these  masters of 20th Century Chinese Art, this season Sotheby's  introduced 11 lots by David Wu Ject-Key, an often neglected artist who had been one of the earliest Chinese artists to study abroad, having spent time in North America. Collectors responded well and nearly all of the works on offer brought far above their pre-sale estimates.