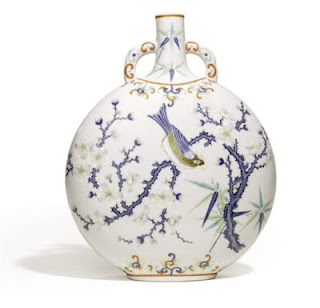 Sotheby’s London will auction a range of over 400 Fine Chinese Ceramics and Works of Art on  November 7,  including two single owner sales - 'Treasures from the Qing Court, A Personal Perspective', a selection of 22 works all produced for the Imperial court during the Qing dynasty from the collection of Chicago-based Cameel Halim, and ‘Chinese Ceramics from the Collection of Peter and Nancy Thompson’.

When Rockford’s Time Museum collection was put up for auction at Sotheby’s in 2001, Mr.  Halim’s purchased one third of this horological collection, in the hope that one day they would be able to continue its legacy, founding his  own museum. Proceeds from this single-owner sale will benefit The Halim Time and Glass Museum which the family are opening in Chicago. The

The sale includes this  Rare Underglaze-Blue Polychrome-Enamelled ‘Magpie and Prunus’ Moonflask, Qianlong Seal Mark and Period. Delicately painted in underglaze-blue and enamelled in shades of green, yellow, iron-red, pink and white, each face of this moonflask depicts a bird perching on a gnarled branch of prunus blossom, accompanied by bamboo. It is inscribed to the base with a six-character Qianlong seal mark in underglaze blue. 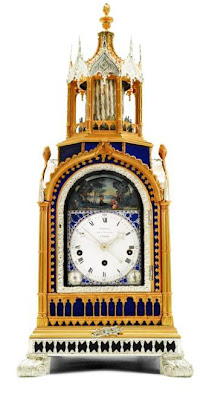 This Fine Silvered, Gilt-Brass and Blue Glass Quarter Striking Musical Automaton Table Clock by Francis Perigral was made in London circa 1790. Perigal, Master of the Clockmakers Company and clockmaker to the King, specialised in musical automaton clocks for the Chinese and Turkish markets. This clock, with performing figures, music and chiming bells, combines the creativity, opulence and novelty that characterises so many of the finest works of art destined for use by the Chinese emperors in the 18th century. Indeed, an example similar to this by Perigral is held in the Palace Collection, Beijing. The provenance of this clock, once held in the collection of Gustave Loup, is perhaps as interesting as the clock itself. Born in the later 19th century to a Swiss watchmaking family living in China, Loup was famed in horological circles for his expertise and for impressive Chinese market collection - reversing the trade of European watches and clocks to China, bringing these masterpieces back to the West. 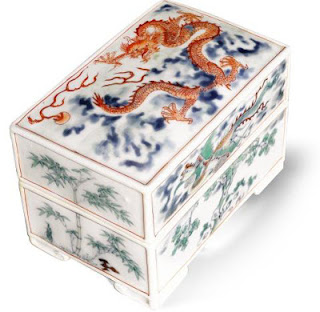 Peter and Nancy Thompson were scholarly, methodical collectors of Chinese Art. They selected their pieces with care and precision, developing a collection which showcased all different facets of Chinese porcelain – from different eras, categories, displaying diverse motifs and craftsmanship. Their extensive collection was formed in two parts - the first part comprising 17th century blue and white porcelain and wares of the Dehua kiln, traditionally known in Europe as ‘Blanc de Chine’, and the second part consisting of pottery and porcelain from the Tang to the Qing Dynasties, with a strong emphasis on the Imperial Qing wares of the Kangxi, Yonzheng and Qianlong periods. Always keen to share their collection and passion with others, these pieces have been on loan to Hull University since 1985

This Fine and Rare Doucai ‘Dragon and Phoenix’ Box and Cover, Qing Dynasty, Yongzheng Period is  unique for its decoration which was inspired by the celebrated Southern Song painting Nine Dragons by Rong Chen (active c.1235 -60). The use of this specific scene on porcelain can be attributed to the creative genius of Tang Ying (1682-1756), Superintendent at the Imperial kilns in Jingdezhen. As a descendent of a bond servant, and belonging to one of the three Banners directly under the control of the emperor, Tang Ying started his career at the Neiwufu (Imperial Household Department) at the age of 16. The palace presented him with the opportunity to study the imperial collection of paintings and decorative objects which provided an essential foundation from which he could produce classical yet innovative designs for ceramic pieces. The Qing craftsman’s command over his materials is evident in the varying use of cobalt blue, from the fine and precise outlines of the composition to the vaporous clouds that naturalistically billow around the dragon and phoenix.