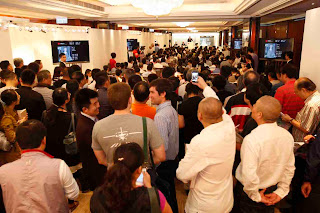 China Guardian's inaugural auction in Hong Kong today, raised $58.6 million USD, more than doubling the pre-sale estimate of $23.9 million. The auction, which hosted over 700 bidders at the Mandarin Oriental, was a historic step for the Chinese art market as it represented the first independent auction by a major Mainland Chinese auction house outside Mainland China.


The focused sale featured two sessions “Chinese Paintings and Calligraphy from the Four Seas”, featuring 319 works of Chinese ink-painting and Calligraphy and “Classic Furniture and Garden Ornaments of Ming and Qing Dynasties”, 39 pieces of Chinese Classical furniture from the Ming and Qing dynasties. All of the lots sold went for prices well exceeding their estimates.


The auction was led by an exceptional landscape series by Qi Bashi, Album of Mountains and Rivers, 1922, in coloured ink consigned from the estate of a leading Japanese collector, Yakichirosuma, which after bids from over 20 buyers was sold for $5.9 million.

The Chinese ink-paintings and calligraphy session came to a total of $45.6 million. Other highlight lots from the first session included:

A masterpiece by Xu Beihong The Eagle and the Pine Tree, 1936 which sold for $2.7 million . The work was given by the artist as a gift to the Chairman of Hunan province, He Jian.

The Chinese classical furniture session came to a total of $13 million compared to the pre-sale estimate of $8.3 million . Important star lots all exceeded their estimates: A late Ming period Huanghuali rectangular table with everted flanges sold for $1.3 million.

In three weeks time, from October 28, China Guardian will hold its 2012 Autumn auctions in Beijing,