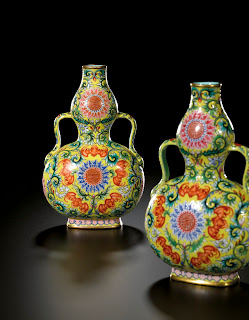 The sale will offer a fine selection of Chinese art from the Ming and Qing dynasties, highlighting imperial porcelains from the collections of Dr. Alice Cheng and J.M. Hu, The Meiyintang Collection (Part IV), as well as Imperial Bannermen Portraits from a European Collection. The four single-owner sales, together with a various-owner sale, offer over 230 lots with an estimated total value of over $64 million 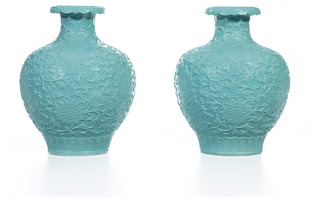 J.M. Hu (Hu Jenmou, or Hu Huichun, 1911-1995), master of Zande Lou (Studio of Temporary Enjoyment), was one of China’s great connoisseur-collectors. His collection encompasses the finest of imperial ceramics, Chinese paintings and calligraphies and scholarly objects. A patron and benefactor, he was known for his generous donations of ceramics to institutions including the Shanghai Museum, as well as his support of publications, exhibitions and research. The sale offers 12 lots with an estimated total value of HK$56 million $7 million, including this  Pair Of Turquoise-Glazed Pomegranate Vases Seal Marks And Period Of Qianlong value at $2.6 – 3.8 million. 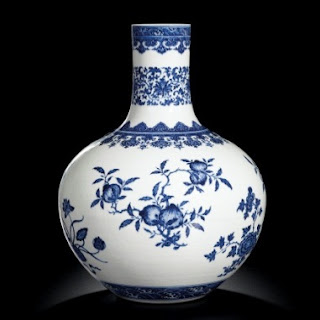 There will be a group of five pieces of Qing porcelain from the Collection of Dr. Alice Cheng, the Shanghai-born business woman and philanthropist. Dr. Cheng grew up surrounded by fine objects. Her parents were celebrated antique dealers, in whose footsteps her brother Robert would later follow and build an illustrious career in the field of Chinese art. Over the last 15 years, Dr. Cheng has put together a formidable collection of imperial Chinese porcelain. The sale offers five lots with an estimated total value of $10 million, including this Large Blue And White ‘Fruits And Flowers’ Vase, Tianqiuping estimated at $2.3 – 3.2 million.