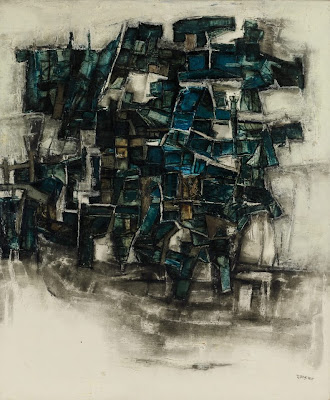 Sotheby’s sale of Modern and Contemporary South Asian Art in New York on 10 September 2012 features high quality works from the 1950s to 1980s that are largely drawn from four private American collections.
These include the Abe and Jan Weisblat Collection - the most important collection of Indian Art to appear at auction since the sale of the Herwitz Collection in 2000. A strong selection of paintings from the high period of Modernism in South Asia are included in this 95 lot sale that is estimated to fetch $3.1/4.5 million.

Spearheading the sale is an early work from Ram Kumar, Untitled (Benares), (SEE ABOVE), a 1966 oil on canvas, from the Weisblat Collection. Kumar visited Benares for the first time with MF Husain in the early 1960s in order to sketch on the spot and feel the city’s depth and intensity.

Other highlights of the sale include paintings by many of the leaders of Indian Modernism such as MF Husain and SH Raza. 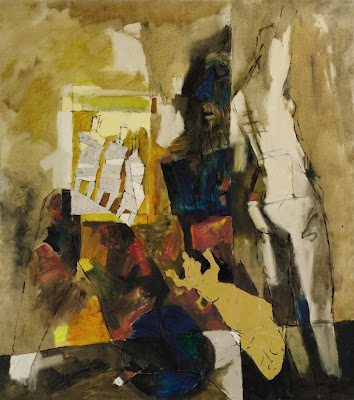 A seminal MF Husain work to be offered is the bold, large-scale canvas, Untitled (The Three Muses, Maya Series) which was acquired directly from the artist in the 1960s. The piece presents a rare and complex composition in which the artist himself appears as the central figure. The dreamlike painting is from the diverse series entitled Maya, a theme that is central to both Buddhist and Hindu philosophy. Husain uses his signature bold outlines and standard motif – the faceless woman.

A very unusual piece... After his first son Shafat was born, MF Husain began working at Fantasy Furniture Shop as a toy designer. He soon became popular for his imaginative and beautiful concepts, and even after he quit his work there, he continued to create wooden toys for children

A highlight of the Late June and John Lewis Collection is MF Husain’s Untitled (Dancers
Under the Full Moon) an example of the unique amalgam of post-Independence/post-Impressionist painting: powerfully evocative of classical Indian plastic traditions and distinctly Modern at the same time. The triple axial posture of the five figures draws upon the tribhanga postures of classical sculpture, and the tight overlapping forms of the central figures are reminiscent of the frieze panels of North Indian temples. 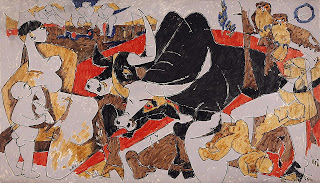 Created during a key point in Indian history, Untitled (est. $50/70,000) from Gulam Rasool Santosh uses earthy colors and tells a story from life in Kashmir. It was acquired directly from the artist’s family.