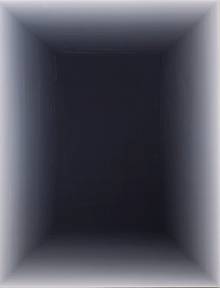 Chinese artist Wang Guangle is holding his first solo show in the US at Pace Gallery in New York.
The exhibition features seven new works from Wang's Untitled series, which extends from his Coffin Paint series (begun in 2004). These large-scale paintings are made by applying layers of acrylic paint to a canvas in a pre-determined order, resulting in heavily-built surfaces that take on illusionistic depth as the tone scale varies, with the lighter gray area surrounding the dark center functioning as a frame.

Born from the Fujian tradition of elders’ preparing their coffins with a coat of lacquer for each year until their impending death, Wang adds paint to his canvas twice daily, with each layer farther removed from the painting’s edge. As the pigment accumulates, the center of the canvas builds and becomes nearly sculptural in dimension. The paintings transform cultural rituals and the passing of time into a purely formal language.
Asian Art Chinese art