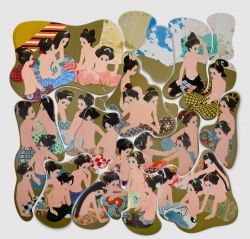 Japanese artist Ai Yamaguchi has opened in Hong Kongher first solo exhibition. The contemporary artist has achieved an international reputation for her strongly characterized style and unique synthesis of the traditional Japanese ukiyoe style with contemporary interpretation, as she incorporates a realistic quality of animé into her imaginative landscapes using the "flat" style of Japanese paintings.

For the exhibition at 10 Chancery Lane Gallery, Yamaguchi installed her largest multi-canvas work to date inside the gallery's space in SoHo, complemented with large site-specific wall murals. These works, entitled ashita mata, take their reference from calligraphy and are deliberately made into pieces, suggesting a fleeting feeling of a lost unity.

Borrowing references from the traditional ukiyoe, which gained its popularity in the late 17th century Edo-period in Japan, she contemporizes her figures of young girls onto super smooth surfaces that are made voluminous by adding padding under the canvas.

Without sharp corners or defined edges, they liberate us to the free association and boundless imagination beyond the canvas. The works show no perspective or shadow reflecting Japan’s post war obsession with manga cartoons, an important subculture among young Japanese.

However, Yamaguchi’s figures differ from popular manga works and are far more personal. Her created postures come from her own posing and are highly expressive scenes of her self-observation of her own body. 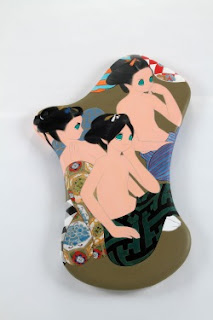 Ai Yamaguchi collaborated with cosmetic brand Shu Uemura in which she developed a series of paintings on the packaging for the brand.