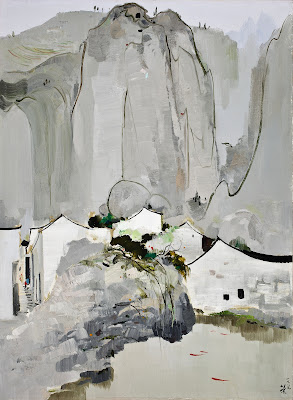 Wu Guangzhong’s A Fish Pool in the Mountain City topped Bonhams Hong Kong Auction of Fine Chinese Paintings and Contemporary Asian Art . Over 170 lots went under the hammer and spirited bidding drove the top lots over their high estimates, achieving a total of over HK$52 mln

Befitting their star quality, top honours went to the front and back cover lots of the sale. The highest price was achieved by an oil painting by Wu Guanzhong (1919-2010), A Fish Pool in the Mountain City, selling for HK$15.22 mln against an estimate of HK$8-12 mln. Painted at the peak of his career in 1987 at the age of 68, the composition bears witness to the fact that in his youth he studied European and Chinese painting techniques, producing together a fluent merger of the two traditions.
Unlike his teacher Lin Fengmian (1900-1991), Wu Guangzhong continued to paint both in oils as well as the more traditional media of ink and paper for most of his career. This monumental work came from an American private collector, purchased at Hefner Galleries in New York in 1989. 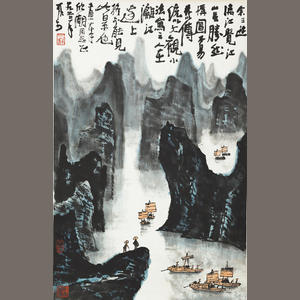 Doubling its estimate, Li Keran‘s (1907-1989) Landscape of Li River was hammered down to a telephone bidder for HK$5.06 mln after intense competition. This innovative landscape painting was done in 1963 and is the most iconic work among his early Li River landscape paintings. 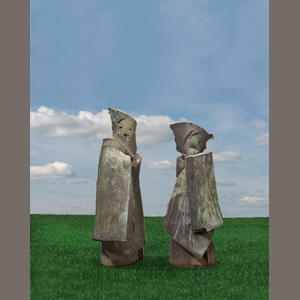 Third place honours went to Ju Ming’s  (b.1938) Living World Series: A Pair of Classical People, selling for HK$3.02 mln. This pair of life-size sculptures, executed in 1983 and acquired by the previous owner a year later from the Max Hutchinson Gallery, New York, is regarded as one of the most important works among the early production of the Living World Series.