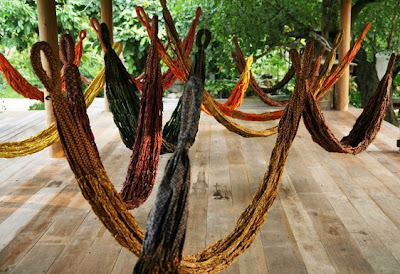 Thai artist Pinaree Sanpitak is having her second solo exhibition with Tyler Rollins Fine Art in New York opening April 19. Entitled Hanging by a Thread, the exhibition centers on a installation of the same title that is the artist’s response to the recent flooding in Bangkok, where she lives and works.


Using traditional Thai printed cotton Paa-Lai fabrics of the type that were included in the royal sponsored relief bags, Pinaree has constructed a group of woven hammocks that will be suspended in the gallery from slender threads. These quite, cocoon-like forms evoke a sense of nurturing, refuge, and contemplation, as well as the precariousness of life.

Pinaree explains that “the Paa-Lai hammocks represent the situation of precarious times balancing traditional and modern values. The hammocks are presence of the body, bare and contemplating. The body waiting to slow down. The body floating. The body just hanging by a thread. Thus a situation I believe we all share.” 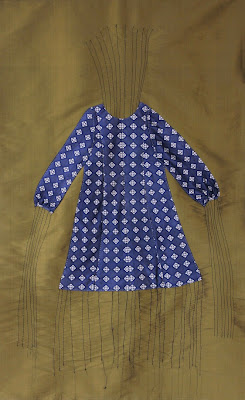 For over twenty years, her primary inspiration has been the female body, distilled to its most basic forms and imbued with an ethereal spirituality.

Also included in the exhibition is Bare Silhouettes, a new series of embroidered works on silk panels that reference Pinaree’s 1998-99 Womanly Abstract series through the bare female form of these simple patterns.

For over twenty years, her primary inspiration has been the female body, distilled to its most basic forms and imbued with an ethereal spirituality.

Later this year, the Chrysler Museum of Art in Norfolk, Virginia, will present a solo exhibition of Pinaree’s work, featuring her large-scale installation, Temporary Insanity. Also this year, she will participate in the 18th Biennale of Sydney (June 27 – September 16, 2012), with a major installation at the new wing of the Museum of Contemporary Art Australia.
Asian Art Thai Art