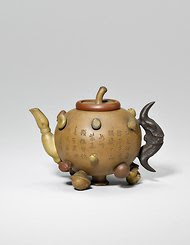 Over the centuries, tea has been poured from pots made of materials ranging from humble clay to precious jade and enameled gold. The design of the pots is equally wide-ranging — from whimsical Victorian follies shaped after animals or flowers to Art Deco futurist models conjuring up race cars and airplanes, or the back-to-earth functionalism of th Great Depression But when it comes to serious tea drinking, many connoisseurs swear by Yixing teapots: nothing else will do.
Tea drinking in China has been a tradition since the Tang dynasty, when the 8th-century sage Lu Yu wrote the Cha Jing, the Classic of Tea, expounding on the origin, history, production and drinking of the fragrant leaf.

In the Song period (960-1279) a wide variety of tea bowls were produced — notably black-glazed pots, high in iron oxide content, thought to keep the tea warmer — according to Tsang Chi Fan, senior specialist in Chinese ceramics at Christie’s Hong Kong.

Teapots from Yixing, in the coastal province of Jiangsu, north of Shanghai, were being made in the 16th century, and possibly earlier. But in the late 17th and early 18th centuries, under the Kangxi emperor, production was raised to a new level with the use of the brightly colored enamels that were discovered at the time. 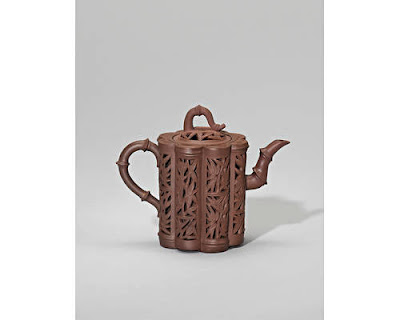 Made of a uniquely porous clay found only in the Yixing region, the pots come in a variety of natural colors including purple, reddish brown and blue.

The clay absorbs some of the tea infusion as it brews, slowly building up an inner coating that retains the flavor and color of the brew. A connoisseur will brew only one type of tea in each pot to avoid muddying the flavor.

Purple Yixing Zisha pots are particularly sought after because the mineral composition of that clay — a mixture of kaolin, quartz and mica with a high content of iron oxide — improves the pot’s ability to retain heat, reduces oxidization and enhances the aroma of the brew. 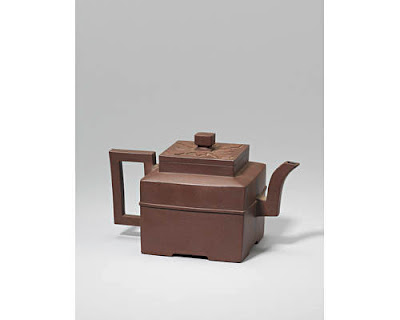 “These teapots maintained the best flavor, color and aroma of the teas,” said Taha Bouqdib, president of TWG Tea, a gourmet tea brand. “Connoisseurs of Yixing teapots, particularly in Hong Kong and Taiwan, do not hesitate to spend a fortune to collect certain ancestral teapots signed by celebrated potters — not unlike collectors of Sèvres, Saxe or Herend porcelain in Europe.”

“Yixing potters during the late Kangxi period really did excel themselves in their art as exemplified by the works of Chen Mingyuan,” Ms. Tsang, of Christie’s said, referring to the most famous Yixing potter and artist of that time. 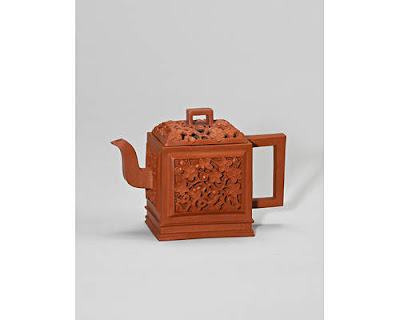 Yixing teapots were exported to Europe, where they were embellished with gold or silver mounts by European artisans. “Some of these teapots were found in the Nanking Cargo which Christie’s sold in 1986,” Ms. Tsang said.

The Nanking Cargo came from the wreck of the Geldermalsen, a ship of the Dutch East India Trading Company, which hit a reef and sank in the South China Sea in January 1752. The wreck, laden with tea, porcelain and gold, was discovered in 1986, and the recovered cargo was sold in Amsterdam for 37 million guilders, or $20 million.

Yixing teapots come in many shapes but their designs are usually simple and often strikingly modern. A plain-looking 1948 Zisha teapot by the grand master Gu Jingzhou, adorned with calligraphic engravings, sold for a record of nearly $2 million at a China Guardian auction in Beijing last year.

“This price really reflected the teapot’s maker, who is considered the most important 20th-century master potter,” said Julian King, Bonhams’ specialist in Chinese art. “In the Beijing market there is a particular emphasis on contemporary masters for Zisha teapots. Like contemporary art, some people prefer to buy contemporary stoneware where they feel there is no authenticity issue,” he said.

Still, though rising in the past couple of years, prices for Yixing stoneware have lagged behind other ceramics, such as Qing dynasty imperial porcelain, and have only started to rise more dramatically in the last couple of years, he said. That gives an opportunity for would-be collectors looking for a niche which still has some upside potential.

Ms. Tsang said collectors of Chinese ceramics have tended to overlook Yixing ceramics, often dismissing them as mingyao, or folk wares made for every-day use.

“Yixing wares of the 18th and 19th century are difficult to find and notoriously difficult to date without any provenance,” she added. “There is also some confusion in the market as many of the early great masters were copied in the late Qing and early 20th century.”

On Nov. 28, Bonhams will offer several 18th- and 19th-century teapots in a Hong Kong sale of pieces from the Gerard Hawthorn Collection, described as one of the world’s greatest single-owner collections of Yixing stoneware.

The only other comparable private collection is the K.S. Lo collection, donated to the Hong Kong Museum and now housed in the Flagstaff Tea Museum in Hong Kong Park, Mr. King said.
The 100 lots from the Hawthorn collection include brushpots, bowls and libation cups. Many teapots in the auction, mass produced for the Southeast Asian export market, carry estimates starting at less than $4,000: but some rise above $100,000.

At the top end of the market, the teapots are likely to particularly appeal to art collectors, Mr. King said, because direct parallels can be found in the Imperial Palace collection. Lot 251, a small Yixing enameled teapot with a stylized chrysanthemum decoration, carries an estimate of $100,000 to $150,000.

“This pot would have most certainly been made and enameled in Yixing, which is reflected in the estimate” Mr. King said. “But if we get two collectors who feel it could have been enameled in the Palace workshop, the price could go 10 times higher.”