Published - Chinese Glass Takes Its Place in World of Art 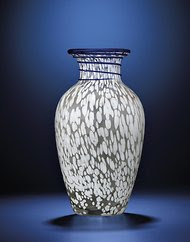 In recent years, collectors of Chinese artworks have piled into Imperial porcelain from the Ming and Qing dynasties, rhinoceros horn carvings, jade objects and Imperial Chinese furniture, and as a result prices have doubled or tripled in many of these categories.
But prices for Chinese glass have trailed behind, often overlooked by collectors because they are less familiar with a category that appears regularly at auction but in very small quantity.

“Prices for Chinese glass have not gone up so dramatically, and when compared to porcelain and jade carvings, glass is still very much undervalued,” said Pola Antebi, head of the Chinese Ceramics and Works of Art Department at Christie’s Hong Kong. “I think it’s partly because collectors haven’t really focused their attention on this art form. There haven’t been many large exhibitions of Chinese glass, and so it’s not a category that is as well known.”

An auction record for a piece of Chinese glass was set last year during Christie’s auction of the Shorenstein Collection, when a Qianlong ruby glass phoenix-form ewer sold for more than $2 million. Its relief-carved decoration and gilt-bronze handle combined inspiration from both a European 18th century silver form and Chinese archaic bronzes.

“This example is the bee’s knees for Imperial glassware,” Ms. Antebi said.
By comparison, a Ming porcelain blue and white vase with fruit sprays recently fetched a world record of $21.6 million at Sotheby’s Hong Kong. 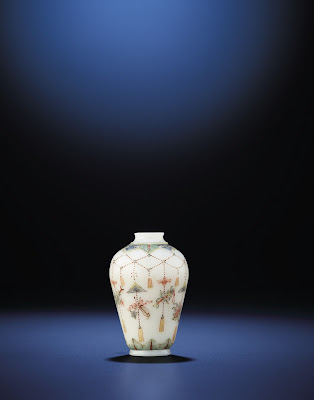 Glassmaking in China has been dated back to the Eastern Zhou period (770-256 B.C.), with these early objects often characterized by their somewhat opaque appearance due to the high content of lead and barium, a silvery metal that occurs naturally in northern China.

By the 13th century, China was an exporter of glass, especially to Southeast Asia. According to Rosemary Scott, international academic director in Christie’s Asian Art Department, who wrote a lengthy essay on the subject for the Shorenstein Collection sale, glass dating from that period was found at a Singapore site, showing that China had become rather sophisticated with the use of contrasting strip colors, either incorporated into the main glass body or inlaid into specially cut grooves. 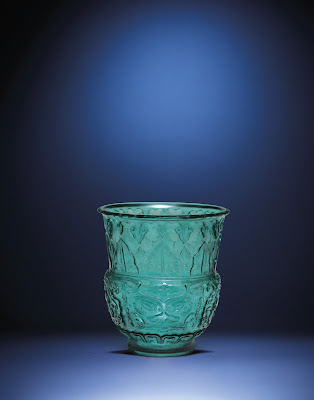 Yet it was only with the advent of the Qing dynasty and the Kangxi Emperor (1662-1722) that glass production and appreciation became truly fashionable in China.

With the help of a German Jesuit missionary, Kilian Stumpf, the Kangxi Emperor established a glass workshop within the palace workshops and workers started to experiment with new glass recipes including, for example, the use of colloidal gold to make ruby red glass. They also started using European blowing and cutting techniques, including diamond-engraving.

After Father Stumpf, two other European glass specialists, Gabriel-Léonard de Broussard and Pierre d’Incarville joined the workshop in 1740. Under their supervision, imperial glassmaking reached its zenith during the Qianlong emperor’s reign (1735-1796). 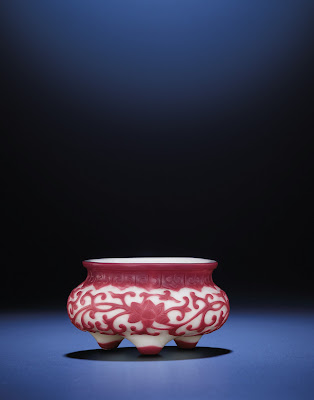 “Glass dating up through the Kangxi period is often characterized by having a crizzled surface which occurred over time and which was rectified in the following periods as the production techniques improved,” Ms. Antebi said.

“With the new recipes introduced by the Jesuits, the glass became more stable and stronger and with that, Chinese craftsmen were able to do more intricate work. You start to see a much wider variety of colors and shapes in the early 18th century, and for the first time large pieces,” Ms. Antebi said.

Christie’s upcoming sale of Chinese ceramics in Hong Kong on Nov. 30 will include an early 18th-century translucent glass vase with an opaque white turtle-shell effect and an overlay of blue swirls on the upper neck and rim.
Estimated at $330,000 to $450,000, “it’s kind of an experimental piece using a very European technique which you don’t see very often in Chinese glass,” Ms. Antebi said.

Qing dynasty glass is often characterized by an overlay technique in which different colors are coated one atop another and then carved away to make multicolored, three-dimensional designs.

Ben Janssens, of Ben Janssens Oriental Art, in London, said, “This technique is certainly one of the most characteristic elements in Chinese glass.”

“Other characteristics are the use of bright, unusual colors or color combinations, and the deliberate imitations of other materials, such as hardstone or jade,” he added.

With the imperial palace workshops working in close proximity to one another, there was an overflowing of techniques used with other materials, such as rhino horn and jade, into glassmaking. There are records of lapidaries trained in jade workshops who were co-opted to work in the Imperial glass workshops.

“Lacquer and jade carvers would certainly have influenced glass designs in terms of decorative motifs and forms,” Ms. Antebi said, adding that while glass was produced in a large variety of colors, some glass pieces were made to simulate jade, others to imitate realgar, a poisonous arsenic sulfur mineral that for a time was used in Chinese medicine. 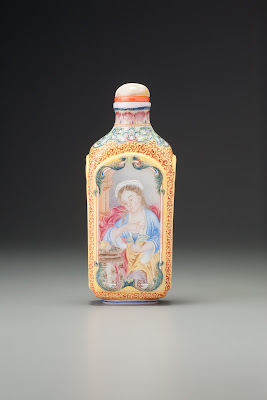 The most commonly found Chinese glass objects sold at auction are snuff bottles, which can range from a few hundred dollars to hundreds of thousands. In Hong Kong on Nov. 28, Bonhams will hold the fourth sale of snuff bottles from the Mary and George Bloch collection.

More than 170 bottles will be offered, with many varied examples of glass ones, including ruby-red glass overlay, inside-painted glass, “realgar-glass” and five-color glass overlay snuff bottles.

One of the highlights of the sale will be a “famille-rose” enameled glass snuff bottle whose design is set apart by the distinctly European, elaborate trompe-l’oeil frames around all four panels. The main panels are of European subjects, while the side ones are Chinese landscapes. 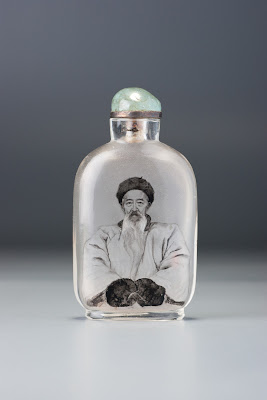 Ms. Antebi issued a word of caution to collectors of Chinese glass. “There are a lot of fakes,” she said, “and as in everything when you are buying antiques and spending considerable sums of money, you want to make sure you go to vendors, whether it’s auction house or dealers, that are reputable.”

“There are indeed a lot of reproductions on the market,” Mr. Janssens said. “It is not that hard to produce a convincing-looking glass object. In any event it is much easier than faking porcelain or jade. Another frequently occurring problem is the later addition of reign-marks to old pieces, something that again is quite easy to do, as the mark is simply engraved on the base of a piece.”

“As with all Chinese works of art,” he added, “the same goes for glass: Buyer beware, and if you are not wholly convinced that the piece you are buying is genuine, then don’t buy it.”