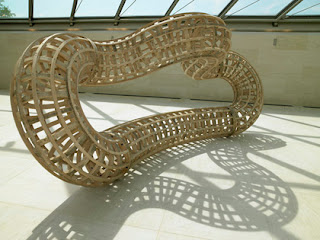 Turner Prize winner Richard Deacon will have a permanent wooden sculpture in the upcoming Louis Vuitton's Island Maison at the MBS, due to open on Sep 18. The well-known British sculptor is also doing a residency at the Singapore Tyle Print Institute right now, which should prove quite interesting 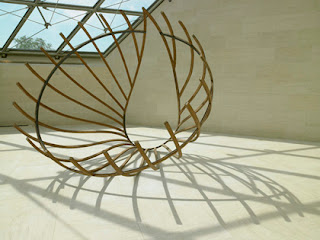 Deacon is an accomplished sculptor who has exhibited widely throughout the world and in significant international surveys such as Documenta IX in 1992, He has been a leading figure in British sculpture since the 1980s (he won the Turner Prize in 1987) and has worked with a diverse range of materials including laminated wood, polycarbonate, leather cloth, stainless steel and clay.

There are no photos yet of the Deacon's new work at LV as it has yet to be installed early September, but it will hang from the glass ceiling of the store (( I'm putting here some examples of his previous works.))) 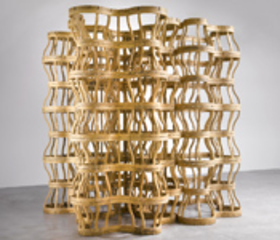 The Louis Vuitton Island Maison is expected to feature nautical-inspired interiors designed by award winning architect Peter Marino. The ground floor will feature the complete selection of men’s and women’s leather goods, ready to wear, shoes and accessories, while the mezzanine level will celebrate the romance of travel by dedicating an area to travel luggage and accessories. There will also be a private lounge for intimate presentations as well as an outdoor loggia reminiscent of a deck on a luxury yacht. To access the island, visitors will have to travel through a tunnel that will showcase more pieces of contemporary artwork.