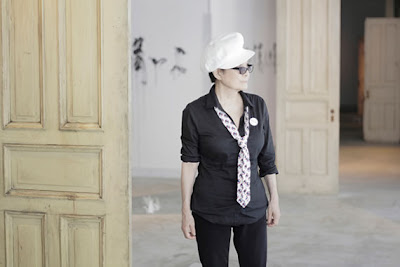 In 1989 the city of Hiroshima, established the Hiroshima Art Prize with the object of promoting through art the “spirit of Hiroshima” that yearns for permanent world peace and prosperity for all humanity. The Hiroshima City Museum of Contemporary Art is staging an exhibition showcasing the work of the eighth prize winner, Yoko Ono.


In a creative avant-garde career spanning over half a century, Yoko Ono, born in Tokyo in 1933, has pushed the boundaries of art with her command of an abundance of media including visual arts, performance, music, film and poetry. Her works, which aim to stimulate the imagination and encourage viewers to take part in their actual production, have been highly acclaimed as pioneering examples of the conceptual art that has emerged as a current of contemporary art since the 1960s. Since then she has continued to create new forms of artistic expression unconfined to any specific genre.

In addition to her practice as an avant-garde artist, Ono became actively involved in the peace movement, staging numerous joint peace events and anti-war campaigns with John Lennon following their marriage in 1969, their message becoming symbolic of the international peace movement that spread across the globe in the 1970s. Ono has maintained her dedication to the cause of peace and love even after Lennon’s death.