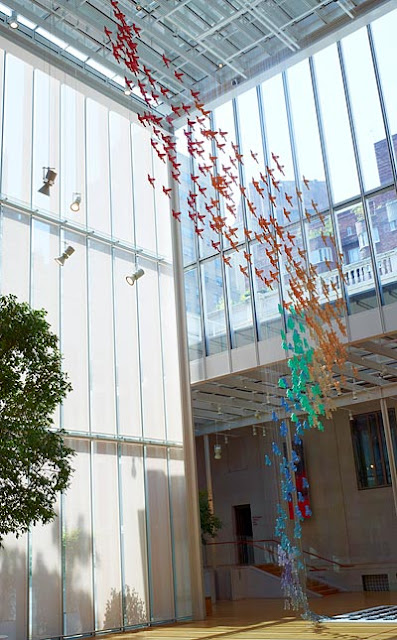 Xu Bing: The Living Word 3 will be on view from through October 2 at The Morgan Library in New York


The Living Word is one of Xu Bing's seminal installations.

“In The Living Word,” Xu Bing explained, “the dictionary definition of niao (bird) is written on the gallery floor in the simplified text created by Mao. The niao characters then break away from the confines of the literal definition and take flight through the installation space. As they rise into the air, the characters gradually change from the simplified text to standardized Chinese text and finally to the ancient Chinese pictograph for ‘bird.’ The characters are rainbow colored to create a magical, fairy-tale quality.” 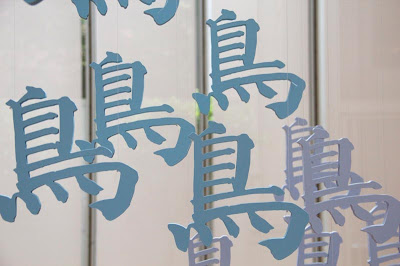 The elegance of the shimmering characters that gradually metamorphose into birds as they ascend masks the subversive nature of the work. While the modern, simplified Chinese characters are fixed to the floor, their form and meaning set, earlier forms of scripts embody an increasing sense of freedom as one moves back in time, from traditional calligraphy to the original pictographs based on images of nature. Xu Bing said that he chose the bird to suggest “escaping the confines of human written definition.”

Xu Bing created the first version of The Living Word in 2001 for an exhibition at the Smithsonian Institution’s Arthur M. Sackler Gallery in Washington, DC. In a second version, a year later, he replaced the Chinese characters with the English dictionary definition for “bird.” At the Morgan, Xu Bing designed a third version specifically for the soaring space of Renzo Piano’s Gilbert Court. 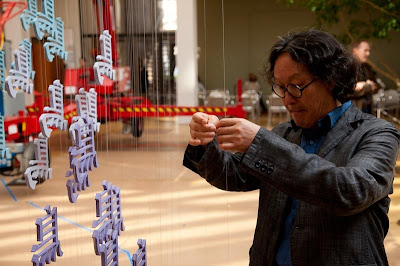 Xu Bing was born in Chongqing, China, in 1955 and grew up in Beijing. After spending two years working in the countryside during the Cultural Revolution, he enrolled in 1977 at the Central Academy of Fine Arts in Beijing, where his studies focused on drawing and printmaking. He gained international recognition in the late 1980s with Book from the Sky, a monumental installation composed of books and scrolls printed with what appear to be traditional Chinese characters. The texts are illegible, however, because all the characters were invented by the artist, exposing the unreliability of the written word as a primary vehicle of communication. Xu Bing moved to the United States in 1990, where his work has continued to focus on written language.