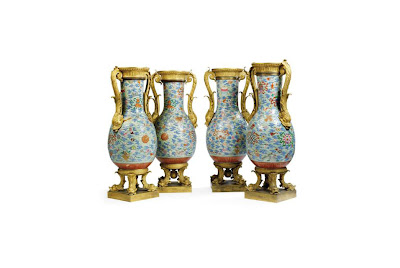 Wynn Macau has acquired a group of important Jiaqing period (1796-1821) vases at Christie's London, which will be displayed exclusively in the company's Cotai resort scheduled to open in 2015.

The pieces are distinctive in scale, quality and number with matched pairs being rare and matched quartets of this age and size never seen. The only known similar examples are in the collection of the British Royal Family.

The purchase was inspired by Steve Wynn's ongoing commitment to return artistic treasures to China,. Wynn initiated the company's cultural commitment with the acquisition of a Ming glazed copper-red pear-shaped vase, Yuhuchunping, produced during Emperor Hongwu's reign (1368-1398). The vase was later donated to the Macao Special Administrative Region and is exhibited as part of the permanent collection of the Cultural Affairs Bureau's Macao Museum.