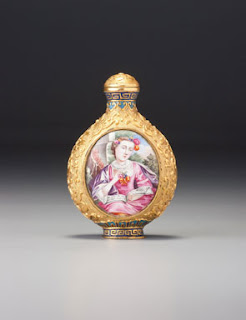 Bonhams Hong Kong achieved a ‘Golden Gavel’ (also known as white glove sale) on Wednesday with the auction of the legendary Mary and George Bloch Collection of Chinese Snuff bottles: Part III. All 142 lots sold out for a total of HK$38.3 million. The blockbuster sale proves that the international market for the finest Chinese snuff bottles shows no sign of abating at the top level. This was the third Golden Gavel sale of the collection.
As anticipated, top price was paid for a gold-ground enamelled copper Imperial snuff bottle, manufactured in the Beijing Palace Workshops probably in the 1770s, which sold for HK$4.2 million to a private Asian buyer (compared with an estimate of HK$3.5 million).
The collection of snuff bottles was not the only major single-owner collection that Bonhams Hong Kong was selling today. The Q Collection of Exquisite Soapstones had been sourced in the West, but sent to Hong Kong in the belief that it would particularly appeal to the new generation of ‘Shoushan stone’ buyers in mainland China and also in Taiwan. The stone originates from Fujian province, and many collectors of Fujianese family origin now live in Taiwan. Carved mostly in the 17th – 18 Century, these small but very carefully designed semi-votive images mostly depict Buddhist and Daoist mythical figures, and have long appealed to southern Chinese buyers. This time active bidders from London, the US, Singapore and even Thailand competed with more traditional South East Asian buyers, ensuring that almost all the top lots were sold at prices often exceeding their high estimates. 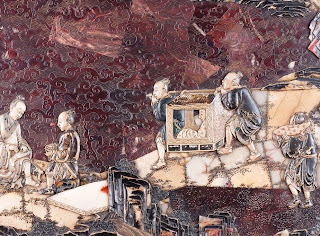 The top price was achieved by a pair of superbly decorated inlaid panels showing mythical landscapes, which sold to a Chinese buyer at HK$3.8 million.