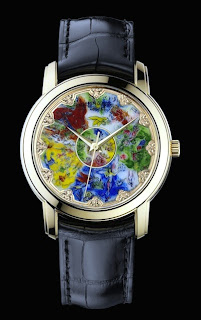 Vacheron Constantin has unveiled a one of a kind creation inspired by Marc Chagall and his monumental fresco painting adorning the ceiling of the Garnier Opera House in Paris. The timepiece features a faithful reproduction of the entire Chagall ceiling, which the artist painted in 1964. Chagall’s work transformed the ceiling of the Opera House into a vast poetic sky whirling with opera heroes, brilliant musicians, entwined lovers and legendary characters, with an overall design of a flower.  Each of the five different coloured petals depict two famous musicians surrounded by some of the works they created. The blue one features Moussorgski and Mozart, along with Boris Goudonov and The Magic Flute; the yellow depicts Tchaikovsky and Adam, with Swan Lake and Giselle; Stravinsky and Ravel shine in red with The Firebird and Daphnis et Chloé; green lends a fresh touch to Berlioz and Wagner and the love stories of Romeo and Juliet and Tristan and Isolde; while white with a touch of yellow exalts Rameau and Débussy, along with the latter’s Pelleas and Mélisande. The works of Beethoven, Gluck, Bizet and Verdi are represented in the circle of the dome surrounding the central chandelier. Dotted here and there are some of the most famous Parisian landmarks: the Eiffel Tower, the Arc of Triumph, the Place de la Concorde with its obelisk, and of course the Garnier Opera House itself. Chagall described the ceiling as “the colourful mirror of silk dresses and jewellery lighting up the shoulders of the most beautiful women in Paris.”