In the wake of Sotheby’s record-breaking Autumn sales series in Hong Kong, which totalled over HK$3 billion, Sotheby’s biannual sale of Fine Chinese Ceramics and Works of Art in London will take place on  November 10. The auction, estimated to realise approximately £5.76 million, will be headlined by a Blue and White 'Peony' Jar, Guan, Yuan Dynasty, mid 14th century, which comes from a private Portuguese collection, with an estimate of £400,000-600,000. In shape, design and painting style, the present vessel is an archetypal example of the 14th century blue and white porcelain, and represents the final stage of the gradual alteration in proportions of the shape known as guan. The neck is more distinctive, the shoulders broader and the body expanded to make the vessel appear stable and balanced. The dramatic swelling of the body contributes to the powerful profile of this guan shape, and the Yuan guan presented a new aesthetic image with its striking blue and white decorative scheme. The painting on the jar encompasses the most characteristic elements of Yuan porcelain design – the peony scroll, lotus scroll, waves, classic scroll and petal-panels or lappets. 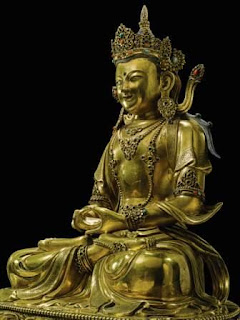 Among a selection of fine Imperial objects is a seated gilt-bronze figure of Amitayus, the Buddha of Infinite Life and the elegant tall gilt-bronze figure of an attendant. The figure was commissioned by the Kangxi emperor (r. 1662–1722) as a gift, possibly for his grandmother who was a devote Buddhist, and belongs to a select group of Buddhist figures made in the Imperial foundry. The Ming dynasty (1368–1644) attendant figure is an important piece because, unusually for Chinese sculpture, it is dated. It bears an inscription that confirms that the figure was made in 1641 on the orders of the Directorate for Imperial Accoutements (Yuyong jian), one of the major directorates of the Ming court responsible for overseeing the production of objects for the Emperor’s use.