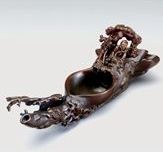 Numbers can tell several stories. Christie’s New York Fall Asian Art Week closed raising $70.75 million, the 2nd highest total for the auction house NY Asian Art week. Chinese works or art sales totaled $55.5 million, the highest total for a series of Chinese art sales in New York. Great results? The devil is in the details. Indian and Southeast Asian art did not performed well, with the auction on Sep 14 only selling 56% of the lots and 49% sold by $$. The South Asian modern and contemporary art sale fare a bit better selling 61% of the lot with Syed Haider Raza’s La Terre, selling for $1.93 million, a touch under its $2-2.5 million estimate. Japanese & Korean Art sold 72% of the lots, but only 58% by $$. The real puller for collectors was the sale of Sze Yuan Tang Archaic Bronzes from the Anthony Hardy Collection on Sep 16 with sold $20.75 million worth of bronzes with 80% of the lots sold and 97% sold by $$. The sale of the Arthur M. Sackler Collections also fare well with 88% of the lots sold and 92% sold by $$. A rare dark-grey stone head of a Bodhisattva, Northern Wei Dynasty (386-535) sold for $158.500, in multiple of the $20,000-30,000 estimate. Christie’s Fine Chinese Ceramics and Works of Art also sold $34.11 million with 82% sold by lot and 94$ sold by $$. A rare Rhinoceros Horn ‘Log-Raft’ Cup, Kangxi Period sold for $3.1 million, compared with its $1.2-$1.8 million estimate. Overall, the New York Asian Week sales at Christie’s and Sotheby’s have been a bit disappointing, clearly showing that collectors are very selective and not snapping up everything that come on the market.
Auctions Christie's