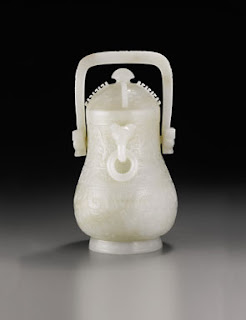 Sotheby’s will hold its Fine Chinese Ceramics and Works of Art on September 15 in New York. The sale will feature paintings, ceramics, jades and furniture including a number of Imperial works from distinguished private collections. Overall the sale is estimated to fetch between $11.8-$16.2 million.
Among the highlights of the sale is a rare white jade vase and cover, Qing Dynasty, Qianlong Period, an exquisitely carved vessel from a small group whose designs are based on archaic bronzes (est. $500/700,000). The Qianlong emperor put together a vast collection of archaic bronzes, symbolizing his power and legitimacy whilst also paying tribute to the past. Objects such as the present vase which are made of the finest materials evoked the values and heritage of these past dynasties and a number are now in the National Palace Museum in Taipei.
Among the important porcelain works in the sale is a rare tea-dust glazed vase (Hu), with the Qianlong seal mark, a pear shaped piece covered in a rich olive glaze (est. $120/150,000). The shape and coloring of the piece have similarities to the archaic bronze hu form. 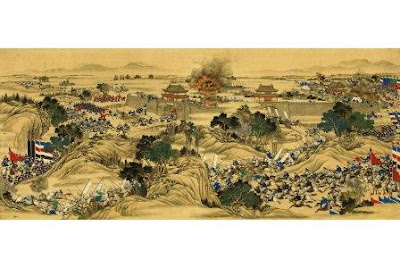 Following the success in March of Two Mynas on a Rock, a 1692 masterpiece by Bada Shanren which sold for $3 million – many multiples of the pre-sale estimate and a new record for a Classical Chinese Painting sold at Sotheby’s in the US, this auction will again present a group of classical Chinese paintings. The highlight is a very rare early Ming Dynasty painting: Landscape in Commemoration of Retirement to Wu Shan by Yao Shou (est. $300/500,000, Not PHOTO, unfortunately don't have the right one!). Yao Shou (1422-1495) retired from an official career after only five years of service. He returned home to Jiaxin, Zhejiang and dedicated himself to his painting, calligraphy, and poetry. His compositional placement of the delicately textured hills on one side is balanced with the empty space of the lake. The composition draws many connections to the Yuan dynasty masters before him, but transcends them in refinement and originality.
The highlight of the furniture is a rare Imperial ‘Zitan’ ‘Dahlia’ Table (Tiaozhuo), Qing Dynasty, Qianlong Period, which is emblematic of the influence that European style pieces had on Imperial Chinese works of art during the Qing dynasty (est. $300/500,000). This period is considered the zenith of Chinese artistic production, but it was also a time when the emperor was fascinated with European art, as demonstrated by objects such as this as well as with larger, more elaborate, cultural projects. The piece, which is carved from the expensive zitan wood, is exceptionally rare with only one comparable table having been published.
Auctions Chinese art Sotheby’s