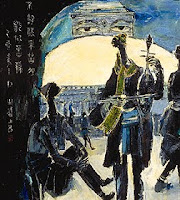 A new exhibition retraces the life and works of Yeh Chi Wei, one of Singapore’s lesser known but still important early artists. Through his highly distinctive oil paintings, Yeh drew inspiration from a wide range of cultural sources, such as Han Dynasty carvings and Javanese batik.

But his works also weave in Western art aesthetics, cultural sources and inspirations from his travels. Yeh led the Ten Men Group (who would developed the Nanyang School agenda)  on painting expeditions to Southeast Asian countries, and was considered a great source of inspiration and encouragement to other artists. The exhibition at the Singapore Art Museum opens on Thursday.
Asian Art Singapore