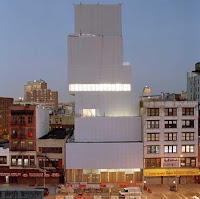 Japanese architects Kazuyo Sejima and Ryue Nishizawa, partners in the architectural firm SANAA, have won the Pritzker Architecture Prize, the architectural world’s equivalent of the Nobel Prize. The jury described their work, which include the Glass Pavilion of the Toledo Museum of Art (right) and the New Museum of Contemporary Art in NY (left), as delicate, powerful, precise, fluid and ingenious, yet not overly or overtly clever. The rest of their portfolio, primarily in Japan, ranges from museums and stores for fashion houses like Christian Dior to schools and a ferry terminal on a small Japanese island. They also designed a now-dismantled temporary pavilion for London’s Serpentine Gallery. They are the fourth Japanese architects to win the prize after Kenzo Tange (1987), Fumihiko Maki (1993) and Tadao Ando (1995).
Architecture