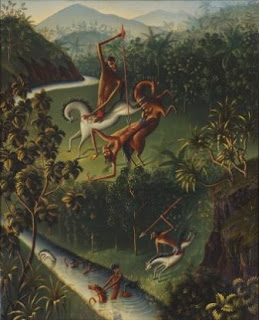 Christie's Hong Kong sale of Southeast Asian Modern & Contemporary Art realised $ 7.3 million, with 87% sold by lot and 98% sold by value. The top lot was the Walter Spies masterpiece Balinesishe Legende (Balinese Legend), setting a new record for the artist at $2.1 million. There was also strong interest in to Wounded Lion by Raden Saleh, the second top lot of the auction which sold for $852,000
The contemporary section saw global collectors responding in earnest to works from the established rock stars of the category including I Nyoman Masriadi and Handiwirman Saputra. That said, prices for Masriadi are still well below what they were in his heydays in 2007-2008, even if his top lot, Trombone, fresh from the easel, sold above its estimate.