Auction - Seminal work by Bharti Kher coming up at Sotheby's 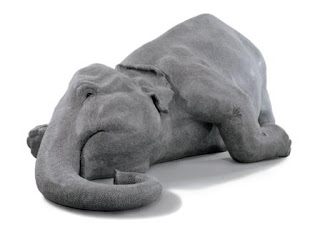 The Skin Speaks a Language Not Its Own (2006)by Bharti Kher will be auctioned at Sotheby's London on Jun 28.  This much talked-about work of art by the leading contemporary Indian artist is a life-size female Indian elephant described as being contoured by the intricately arranged patterns of thousands of bindis that organically swarm across the beast as a second skin. Unlike the proud standing elephant figures usually seen in India's adverts, Kher's elephant is depicted in a crouched position, leaving it open to interpretation as to whether it is in the process of standing up or falling down — a metaphor on India's rapid transformation and the attendant consequences. The work is estimated at £700,000-1,000,000.
Asian Art Auctions Sotheby’s