Deconstructing the Appeal of the Kimono 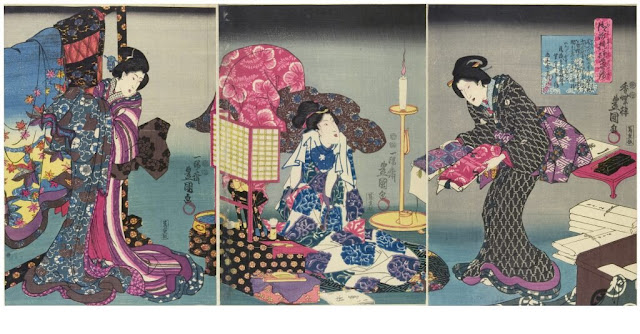 The kimono is perhaps the ultimate symbol of traditional Japanese culture, a distinctive clothing item with a history stretching back to at least the late 8th century. The initial tubular sleeves of the Heian era (794‑1185) may over time have been replaced by longer styles, and the obi belt widened significantly on the women’s version in the 18th century – while the men’s belt remained narrow – but the kimono’s basic shape as a straight-seamed garment cut across the grain from a single bolt of cloth has remained unchanged. Yet, its appeal and relevance endure to this day, with the garment even enjoying a new popularity as a fashion item in Japan rather than purely formal attire for special occasions.

“The future for the kimono itself was looking bleak until quite recently. Now Japan is witnessing a kimono renaissance. This started on the street, with the restyling of vintage garments by young Japanese tired of incessant changes in western fashion and bored of the uniformity of clothing available,” says Anna Jackson, a senior curator at the the Victoria and Albert museum’s Asian department.

Jackson is the lead curator of Kimono: Kyoto to Catwalk, a new fashion exhibition at the London museum running until Jun 21, 2020. The exhibition aims to highlight the sartorial and social significance of this icon of fashion that has inspired some of history’s greatest designers from Poiret to Yves Saint Laurent, John Galliano, Alexander McQueen, and Rei Kawakubo, to name a few. 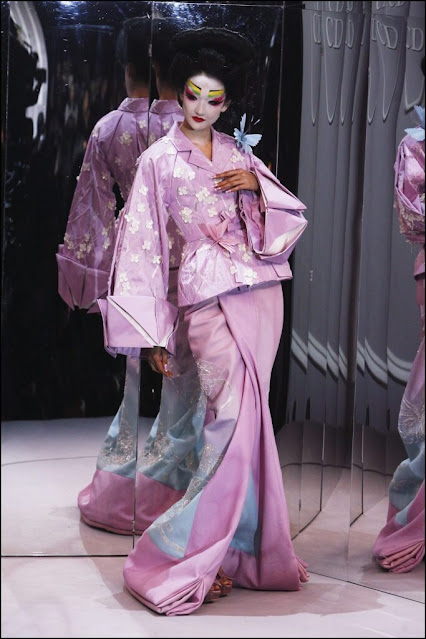 “Kimonos exerted an enormous influence on European fashion in the early 20th century and indeed still do. It is not a case of ‘taking liberties’ or ‘adapting’ an original. Fashion is not about copying. Designers draw inspiration from various elements, such as the shape, the construction, the style of wearing, the patterning, and re-configure them,” she says, pointing out that the potential of the kimono “to be deconstructed and re-formed, translated and transformed, makes it a uniquely versatile foil for fashion.”

Long before Paul Poiret liberated women from the restricting corsets of the Belle Epoque, thereby ushering in a new era of loose silhouettes for fashion, and before Coco Chanel rebelliously embraced menswear-inspired clothing as everyday-wear for women, the kimono embraced all body shapes instead of constraining them and helped claim equality for men and women, at least in this one area.

“Kimonos were historically worn by all classes and by both sexes. In the West, clothing has tended to emphasise the wearer’s shape, whether it be the waist, bust, hips or buttocks, but in Japanese dress, the shape of the body is irrelevant. The way the kimono is constructed creates a continuous flat plane that provides a platform for decorative design; it is through choice of fabric, colour, pattern and technique that a wearer expresses their gender, wealth and taste,” remarks Jackson. 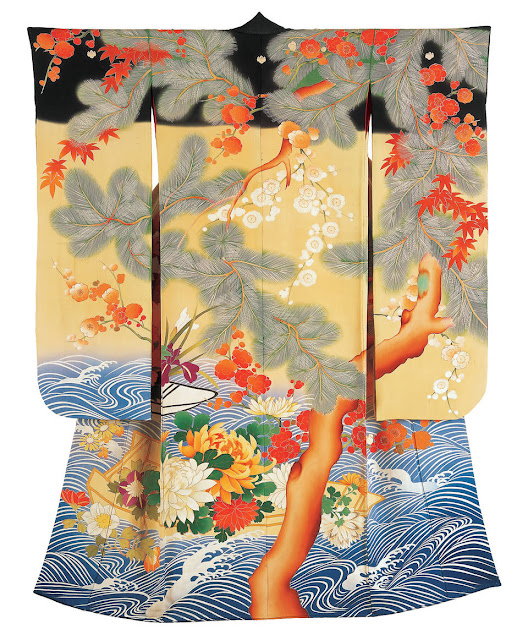 Kimono: Kyoto to Catwalk retraces the history of the kimono starting in the mid-17th century, when a vibrant fashion culture was emerging in Japan thanks to an increasingly wealthy merchant class and the quintessential Japanese garment was also starting to be exported to Europe.

Although Japan was still operating a closed country policy that severely restricted foreign relations, it was still part of a dynamic global network of cultural exchange. “The Dutch East India Company (VOC) representatives, who were permitted to trade in Japan, were given kimono by the shōgun (rulers) and senior daimyō (lords) which were sent back to the Netherlands. There was already a tradition in Europe of wearing loose gowns, which were usually plain in colour and made of wool. The brightly decorated silk kimono caused an immediate stir and, realising their popularity, the VOC commissioned versions from Japanese artisans with slightly adapted sleeves and thick wadding,” Jackson explains

Because the Japanese could not supply enough to meet increasing demand, the Dutch started to order cotton versions from south-east India, in the fabric generally known as chintz. These, Jackson says, were also worn by some Japanese, with the brightly patterned cottons from South and South-east Asia especially desirable. 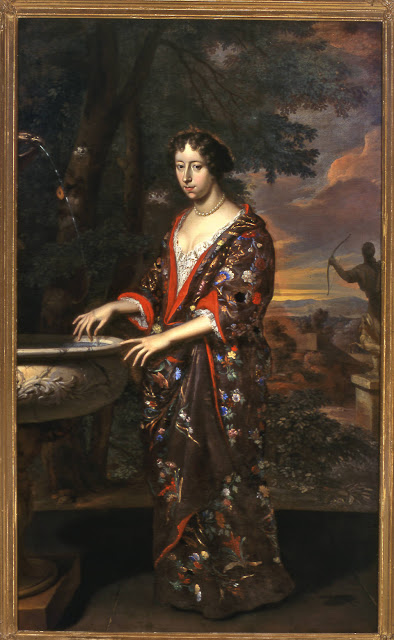 Back in Europe, kimonos were also being made from imported or locally produced silk such as French brocade. “These garments were called ‘Japonse rock’ (Japanese robes) in Dutch, regardless of their origins, and ‘night gowns’ in Britain. They were worn informally around the home, but not in bed, and it was perfectly acceptable to receive guests wearing one. It was not deemed socially acceptable to wear them outside the house, although people did,” Jackson says. While the garment was usually associated at the time with men, women did wear them as can be seen in a wonderful 1678 portrait of Anna Elizabeth van Reede by Gerard Hoet on display at the V&A exhibition.

“Their appearance in portraiture reveals the enormous popularity of such garments. They symbolised status and style, as well as a sense of engagement with the wider world. People would have known the difference between those made in Japan and those made locally from other fabrics,” Jackson remarks.

While only a few kimono reached Europe during the Edo period, the situation changed after the mid-nineteenth century, when Japan was forced to open its ports to foreign trade. This aroused enormous interest in Europe and America, with the subsequent flood of goods that reached their shores leading to a craze for all things Japanese, especially textiles that would be draped on furniture or used as curtains and on screens.

Jackson notes that women also wore kimono in the home and says the garments evoked, “the novelty and exoticism of Japan. They suggested luxury as well as non-conformity, being associated with aestheticism and a bohemian lifestyle. They could also hint at the supposed eroticism of the East. Kimono were central to the alluring vision of Japanese women and the fantasy of the geisha. For those advocating dress reform, however, the kimono offered a style of clothing free of restrictive corsets.” 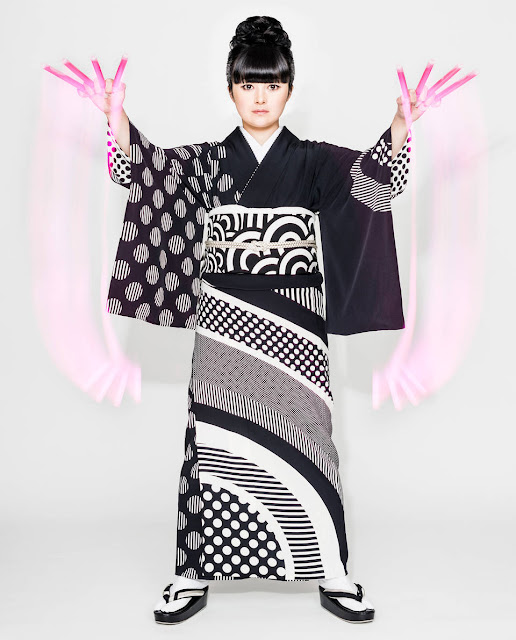 Today, a new wave of designers is emerging in Japan who are approaching the creation of kimonos in fresh ways, with new types of patterning and more casual styles. Kimonos’ designs today have also moved away from heavy silk and turned to jersey, wool and denim.

Amongst these new designers, the Kyoto-born Jōtarō Saitō has been leading the way as he creates fashion kimonos for everyday wear, instead of costume. While Saito’s kimonos uphold many Japanese traditions – they are made by hand, from the dyeing stages to stitching, printing and embroidery – they also incorporate modern touches, such as fur-lined hoods or polka dot obis. Meanwhile, Hiroko Takahashi is bridging the divide between art and fashion, with her graphic-print kimonos using a mixture of circles and lines in her contemporary designs.

Reflecting on the exhibition, Jackson says “I hope that visitors will come to realise that fashion is not a European invention – it flourished in Japan as it did in other parts of the world, and that they will realize the enormous impact that kimonos have had on global dress styles and how fashion can transcend geographic borders, blurring boundaries between the familiar and the foreign. Perhaps they will be tempted to add some Japanese elements to their own wardrobe.”