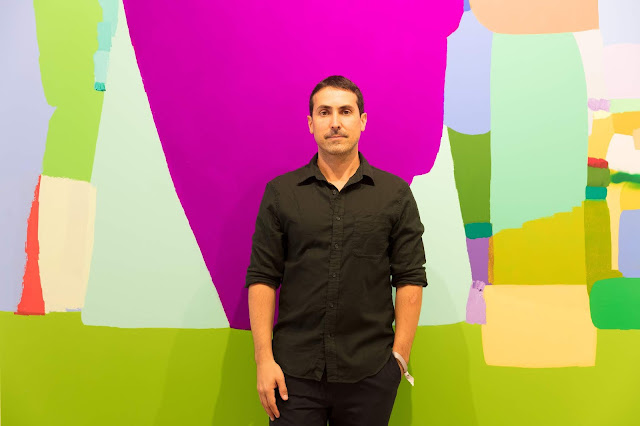 Most artists work really hard for many years in the hope of one day having a solo show. For Federico Herrero it was rather easier. Shortly after a gallery in San Jose, Costa Rica, presented his first solo exhibition, when he was only 21, the distinguished curator Harald Szeemann saw some of his unsold works in the gallery’s backroom and immediately invited him to participate at the 2001 Venice Biennale.

Playing with shapes and elements of architecture in a derelict hangar, the young Costa Rican artist created a colourful mural that brought to mind street art while encapsulating the idea of social decay. With that work Herrero went on to win the special prize for young artists at the Biennale, which immediately brought him to the attention of other curators, as well as commercial galleries. “That’s how I started to connect with the international art world, while still living in Costa Rica,” the artist recalls, reflecting that his early success gave him some direction in terms of what he wanted to do: “having a parallel practice between the very ephemeral approach and the canvas paintings.”

Herrero is aware that his life could have been very different, even with or perhaps because of such early success. “The Biennale really opened doors. It put my work in front of other very well-known curators and I also immediately got two galleries, one in Madrid and one in Germany, contacting me. Imagine for me so young, having two galleries in Europe wanting to represent me. It was amazing. I’m very lucky that things didn’t go wrong, that my life has continued in a very organic way and didn’t crash,” he muses.

Herrero’s visual language is deeply rooted in the colours and landscapes of his native Costa Rica, and the artist has become internationally recognized for his colourful public ‘interventions’ and large-scale paintings, characterised by abstract patches of bright colours that seep into one another without clear boundaries. 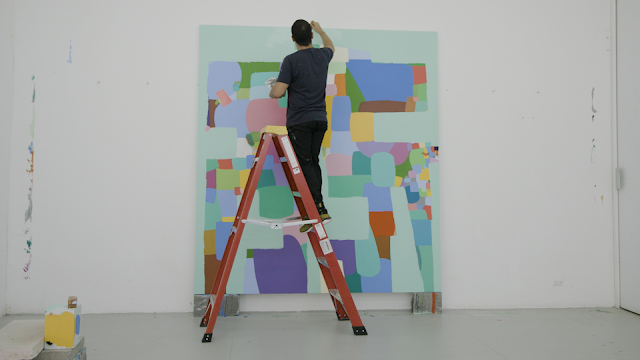 While his artworks may place him within the Latin American tradition of muralists, they are completely unpolitical. Instead, Herrero’s work is more aligned with the ‘colour field’ painters of the 1950s-60s, such as Mark Rothko and Morris Louis, whose works emphasize the flatness of their canvas with bright amorphous of geometrical shapes.

Mary Rozell, Global Head of UBS Art Collection, which has acquired four works by Herrero, says the artist’s work “has a powerful, physical effect on you and part of it is the potency of the colours alone.”

In June, the Costa-Rican artist created an 11-meter-long wall painting for the UBS Lounge at Art Basel, where five new canvas works were also on display. Rozell notes the artist was a clear choice for the bank’s Art Basel commission, both for his imagination and for his willingness to explore new spaces: “We like that he’s not restricted to canvas in his practice and that he’s committed to engage with the wider world and community.”

Herrero says he likes his “murals” to be tied to an experience rather than be “connected to decoration,” and as such they are often not mounted or painted on walls, but can be found on the ground in a children’s playground in London; the bottom of a swimming pool in Havana (the world map he painted at the bottom of a public pool allows Cuban swimmers to freely “roam around the world”); the pillars of an overhead railway line in Medellin, Colombia, or roof terraces in Athens, Greece. 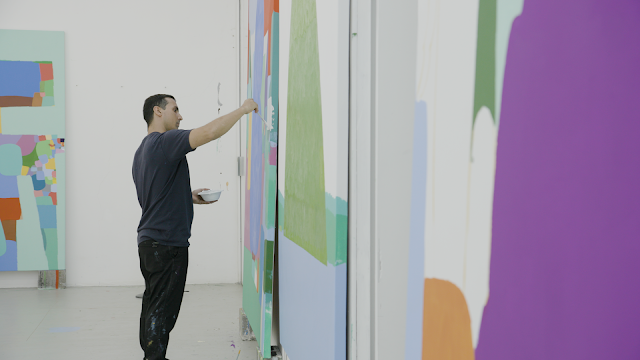 The artist says there is not much separation between life and work: “A crucial aspect of my work is certainly the blur of the experience of the work and how you experience it in the space and in your life. I always work with that methodology of not having a schedule or a pre-conceived plan.”

Working without sketches or a specific plan, and primarily using acrylic paints — which forces him to work quickly and helps lend his artwork brighter hues — Herrero says he enjoys the sense of immediacy, responding physically to the work in progress, incorporating cracks and holes in surfaces.

“It starts by creating some shapes, and they start responding to each other. I like to create a dialogue in the space. For me it’s a bit like opening it up, creating a type of musicality in the space,” he says, adding that he hopes that as visitors navigate through his murals or paintings they can experience colours as if listening to a song [i.e. each colour being a music note].

“When I work in my studio, I work on several paintings at the same time, not one by one. It has to do with form; information jumps from one canvas to the other, and they start to have some kind of communication, in between them and in the place,” he says.

Herrero notes his site-specific installations around the world have shown him “the transformative impact art can have on communities, as it brings people together and can completely alter the environment.”

To give others the chance he had been given, Herrero founded Despacio in 2007. The independent art space in San José, Costa Rica, serves as a platform for other artists to show their works. “Someone gave me a space and that created opportunities for my work to be seen, and I’ve always remembered this first time somebody gave me that chance,” he says, adding, “The main goal [for Despacio] is to awaken a soul for experimentation, to give artists real freedom without rules.” 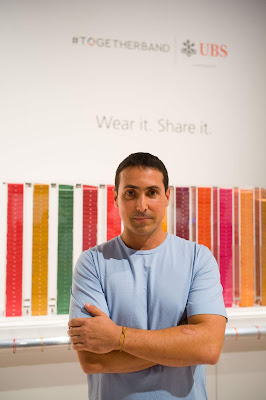 Today, the centre has become a place for thought-provoking art performances and art installations. These have included Naufus Ramirez Figueroa’s For You the Banana Ripens to the Weight of Your Sweet Love, when the Guatemalan artist slept in the gallery curled around a bunch of bananas until they ripened under his body’s warmth (it took 20 days), while inviting visitors during the day to do the same; and Maya Rochat’s recent A River is A Rock, an installation of analogue photographs and digital screen prints hanging from walls like pages torn from a giant book.

In addition to helping other artists explore their ideas, Herrero believes it is important for artists to use their practice to raise awareness about global issues. This year, he created a series of mono-prints for the UBS Art Studio at Art Basel, the Swiss bank’s public booth dedicated to the UN’s 17 Sustainable Development Goals.

These monoprints were part of a presentation dedicated to #TOGETHERBAND – an initiative by accessories brand BOTTLETOP that is trying to raise awareness about the UN’s 17 Goals through 17 friendship bands (made from up-cycled ocean plastic and re-cycled steel from sized firearms).

Herrero is concerned with the ocean plastic issue in Costa Rica and the Sustainable Development Goal for quality education. “I'm passionate about how art can be used as an educational tool, responding to the surrounding environment and seeking audiences to develop a deeper understanding of the world and how things connect, leading to a more sustainable future,” he says, adding “the most important things is to stop thinking and take action right away.”

A version of this article first appear in A: The First Of (October Edition)