Vik Muniz on his collaboration with Ruinart 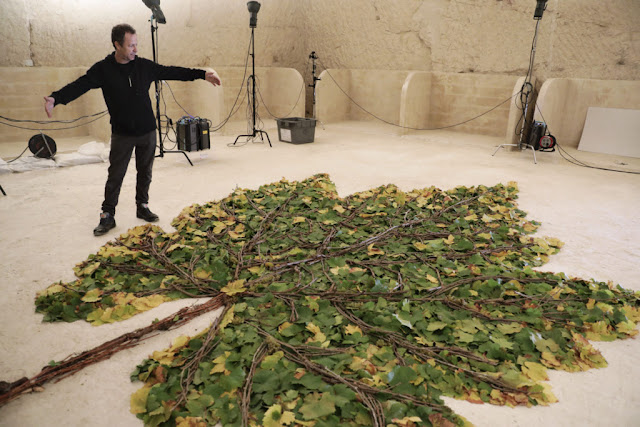 One night while looking for a restaurant close to their pied-à-terre in Paris’s elegant 7th arrondissement, Vik Muniz and his wife stumbled upon David Toutain Restaurant. “We had an amazingly remarkable meal,” the Brazilian artist recalls, and then noting that at the time they did not know it was Michelin-starred, he adds, “It’s great when somebody tells you (about a restaurant), someone you trust; but it’s much better when you go completely unaware, not expecting anything, sit down at the table and, we were like, ‘Wow!’”

The next day, as Muniz was discussing a collaboration project with Champagne house Ruinart, he was asked if he knew any interesting chefs who could be invited to participate. “I said, ‘Yes, I do! I just went there yesterday: David Toutain.’ And then, we discovered, it was the first one on Ruinart’s list.”

And so a project that started serendipitously last year, saw Muniz, Toutain and Ruinart’s cellar master Frédéric Panaïotis collaborate on an innovative new initiative, Food for Art, that would bring together art, gastronomy and of course the wines of the Maison. “In my opinion, the only way you can feel all the senses at the same time is in a meal” Muniz remarks. 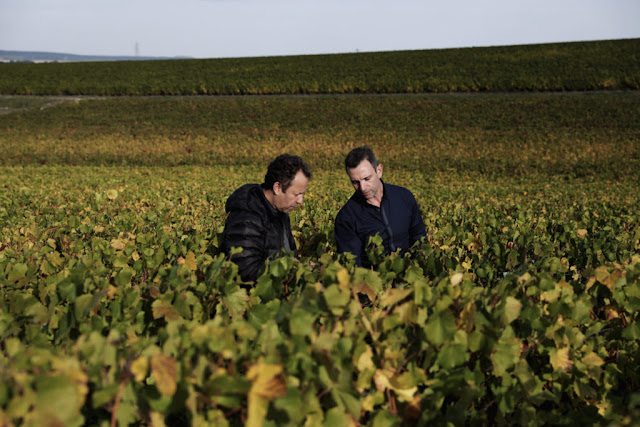 The three of them created a menu around root vegetables — such as beetroot which in one dish is paired with Pigeon, salsify branches and white chocolate –that echoed the artworks Muniz had created having been inspired by the vines he had observed during an art residency with Ruinart last Fall.

Muniz, who describes himself as a “low-tech illusionist,” is perhaps best known for his photography of ephemeral images, which often reference classical paintings, which he has created with unusual materials such as sugar, chocolate syrup, caviar, and even garbage. “I like to use elements that everyone can relate to as much as I try to represent images that are part of our collective memory,” he says.

As Ruinart’s artist of the year, Muniz was given carte blanche to create artworks the maison will present this year at events that it supports around the world, such as Art Basel.

While Muniz had previously collaborated with another champagne house, Perrier-Jouët, to create a limited edition bottle and packaging for its Belle Epoque cuvee, his work with Ruinart was the first time he had a “deep interaction” with a cellar master.

Muniz has had a long-time interest in trees and their morphology, and says he found the shape of vines particularly fascinating as they “offer some sort of narrative.” He spent many hours in the vineyard alongside Panaïotis and was intrigued on learning that Champagne is a region that is “quite cold and difficult, with poor soils,” noting, “I liked this paradox. The adversity makes better fruit and makes better wines.” 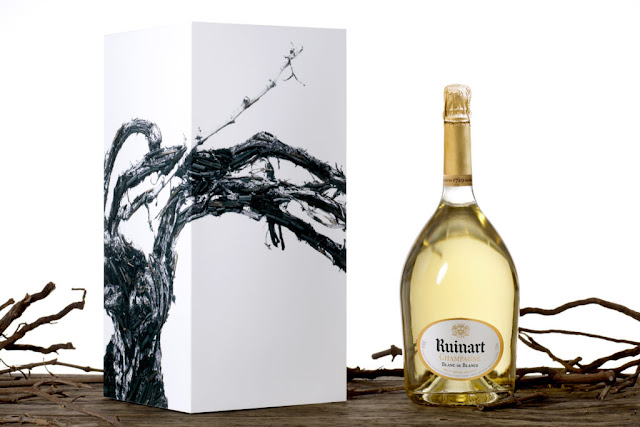 He created a series of compositions for photographic works that aim to emphasize the creative tensions that transform adversity into liquid wonder. In one of the photographs, later reproduced in blackened wood and charcoal, Panaïotis’s arms grasp gnarled vines. The tension in his veins blends into the knots found in the vines, blurring the boundaries between the human and nature.

“I was inspired by the notion of flow. I wanted to represent the slow flow of vines getting their nutrients and the water from the chalky soil in Champagne. From far it looks like strong gestures, like Butoh dancers, and more closer you have all those details,” Muniz explains.

“For me the artwork is the final photograph and time-lapse,” Muniz notes, adding, “I’m interested in the process, not in the materials themselves.”

Ruinart has incorporated one of the blackened wood and charcoal artworks Muniz created on the packaging of the jeroboam case for a 3-litre bottle of Ruinart Blanc de Blancs. A limited edition of only 30 cases is available bearing the signature of the artist.

A version of this story was first published in Keyyes.com