An Interview with Jiten Thukral and Sumir Tagra

Jiten Thukral and Sumir Tagra, who collaborate under the collective Thukral and Tagra, often use games as a device to draw viewers to their work, but don’t be fool by the playfulness of their installations or the colourful imagery of their paintings, it’s all done to raise awareness about serious societal issues.

“It’s a tough question that we ask ourselves and our peers: ‘What does an artist do in these volatile times?’” says Sumir Tagra, adding that interest in responding to social issues has always been at the heart of the duo’s practice. “We want to work on projects that have a poetic narrative yet also have layers of information,” he says

“We feel there is a lot to speak up about, and through an artistic voice we can respond to urgency and take risks to make things more empathetic and humble,” Jiten Thukral adds.
Since 2004 when they first teamed up, the artists have dwelt on the rise of consumerism amongst India’s middle class, looking at the aspirations of Indian youth, their search for a better life in a big city or another country, and the harsh realities that can also be associated with rising up the social ladder.

“We were interested in the aspirations and when success is attained how it is manifested, what does it signify, how does it impact the family, the parents, how one values life, basically all of its effects. And these are questions which we asked ourselves as well,” Tagra says.

For their latest project, Bread, Circuses & TBD — now showing at the Yorkshire Sculpture Park in northern England until September 1, 2019 — the artists have devised a game to help audiences connect with the plight of Indian farmers.

Fragmentation of land holdings, lower crop yields, inherited indebtedness, rising inflation are just some of the problems currently facing farming communities in India, leading to suicide amongst many farmers. In fact, after several years of extensive research, involving conversation with people in 15-20 villages in Punjab, the two artists have identified 100 issues that are the starting point of their latest installation in Yorkshire.

“We’re not reporters, so we have to respond in our own way,” Tagra explains, adding “research takes us to the real issues; we feel the skin of it and try to understand the pain and only then we can make any sense of what we are responding to.”
He later points out that in India, “farmers are wrestling with invisible issues, which we were aware of, but we weren’t sure how to put them together and analyse them,” adding, “We also didn’t want to respond with the visual of what we had discovered, but rather use these as a background for the work that we are trying to create on canvas.” 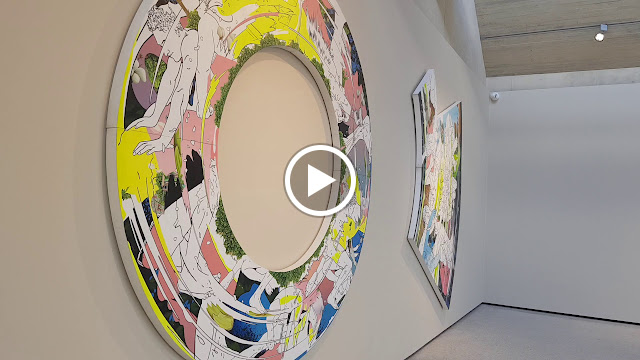 The artists have been using kushti, a traditional form of wrestling still commonly practice by Indian farmers, as a social construct to explain the trials and tribulation faced by small rural communities. Thukral’s father still co-owns an akhara (a sport community where kushti is performed) and the artists have has been supporting the akhara community of Jalandhar, Thukral’s hometown, setting up a kitchen, run by and for the families of farmers who have been affected by suicides, providing meals for their children.

Tagra describes Bread, Circuses & TBD as a culmination of their research over the last 10 years, adding that the installation also incorporates their interest in game theory as they like to give an opportunity to viewers to “physically connect with the artwork and the issues” by participating in a games that subtly leads them to dig deeper into the meaning of the work.

“We wanted to have this game centre stage, to open up the discussion,” Thukral adds.

The central installation Farmer is a Wrestler is a twister-like game that invites participants to stand on a giant circle and try seven traditional wrestling manoeuvers following a sequence of numbers, each representing a trial faced by farmers, such as global warming, suicide, debt (all listed on an adjacent wall).

One sequence refers to the distress and resulting protests caused when the Indian government sets the minimum price of produce too low, another refers to farmers having lower yields because they have less land, a result of land reforms and the subdivisions of land between sons each generation. As participants follow the instruction and perform the manoeuvers they will come to appreciate the weight of compounding problems faced by farmers.

“I think one of the most important elements of this work is audience engagement. Some of the movement can be a bit painful, which is another way to relate to the farmers,” Tagra says.

On the walls, a huge circular painting, broken up in several pieces, showcases an endless scene of wrestlers, practising Kushti.

“We wanted to abstract the conversation we had, rather than use it as a subject matter,” explains Tagra, pointing out that the dark blue base layer of the painting reflects the twilight in the village — the time of day when the artists usually interviewed the farmers and their families — while the use of highlighting pen to draw the figures emphasises the issues now under discussion.