Zeng Fanzhi in the Studio, an Interview 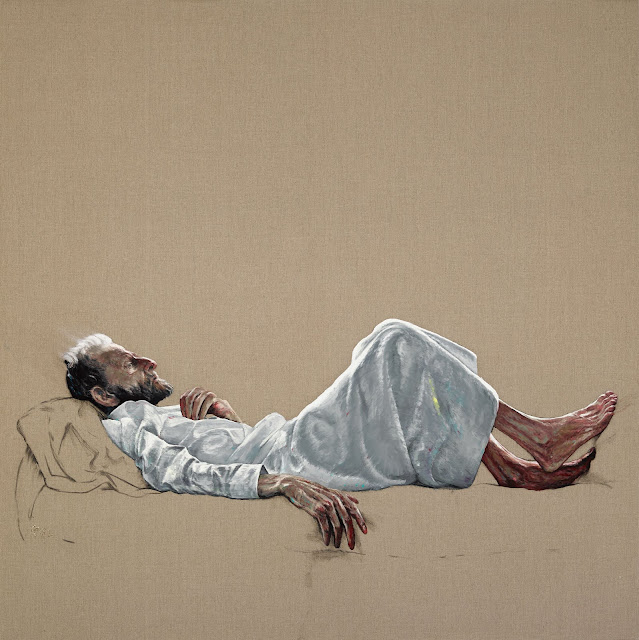 With the mix of figurative realism, expressionism, and abstract expressionism portraits currently on display on the walls of Hauser & Wirth gallery in London, you may be forgiven for thinking you’ve walked into a joint exhibition by different artists. But these are all works by Zeng Fanzhi, produced over the last 29 years.

Zeng is arguably one of the most established Chinese contemporary artists and this latest mini-retrospective underlines why he has remained relevant: unlike many of his contemporaries, he hasn’t stuck to just one style, instead constantly experimenting and reinventing his approach.

Hauser & Wirth is dedicating three of its spaces – a first for the gallery – to Zeng Fanzhi. In the Studio, a multi-location single exhibition unified around Zeng’s painterly investigations. While London hosts an exhibition dedicated to the evolution of his portraiture, a smaller but recurring part of his practice, the gallery in Zurich focuses on his most recent wild stroke landscapes that have moved further toward full abstraction and the show in Hong Kong (opening Oct 8) will present recent works created around the artist’s exploration of the relationship between Zhao Gan’s Early Snow on the River (late 10th c.) and Paul Cézanne’s Mont Sainte-Victoire series.

The London exhibition has been divided into two spaces with one side presenting a series of carefully selected works by the artist (including several from his personal collection) that span his entire career, from a 1989 small portrait of a fellow student completed while he was still studying oil painting at the Hubei Academy of Fine Arts to his seminal Mask series and his most recent wild strokes portraits of Van Goh (2017‑2018). The second space is almost entirely dedicated to works created this year (other than one 2017 Lucian Freud portrait), hinting to the latest development in the artist’s career but also a return to self-portraits after a 10-year break. 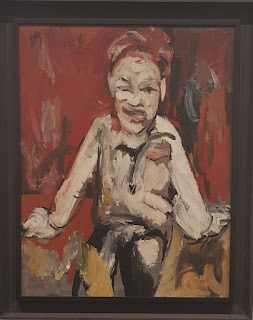 Born in 1964 during the Cultural Revolution, Zeng was schooled in Social Realism that encouraged a narrative-based painting method and realist techniques, but he showed a rebellious streak early on as he absorbed the ideas and techniques of German Expressionists and Abstract Expressionists.

The earliest portrait in the London exhibition, Smiling Beck-ning (1989) shows the clear influence of Willem de Kooning on the young student and presages the style of his first two big series (Hospital and Meat) that used a lot of red as an emotional color to represent the brutal conditions of human existence. The sitter, one of his classmates, is shown with his arm relaxed along his body, seemingly ignoring the large black spider crawling up one of his sleeves, but his facial features are heavily deformed (suggesting inner conflicts). The portrait is created in thick stark white and gray strokes that contrast with the blood red background. 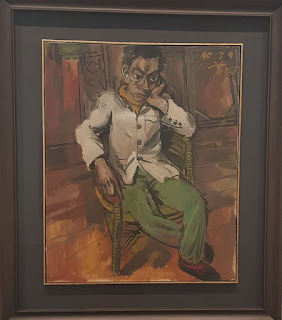 Next to it is another early work from his student days, A Man in Melancholy (1990), which also holds a special place in the artist’s heart as it was the first time he used a palette knife, a technique he often revisited. That palette knife still sits in his studio in a special red box, Zeng told COBO, adding he still uses it regularly.

Zeng bought the two paintings at auction in recent years and says he did so because he felt they were his most important early works, “not so much because they are great portraits but because through these two paintings I had a kind of epiphany or revelation” (in terms of using his inner feeling to portray his sitters). A Man in Melancholy show his sullen-looking sitter with large wide-open eyes and oversized hands, two key features that would reappears in the artist’s work over the next decade.

Throughout the 1990s while most of Zeng’s contemporaries created works as more overt political and social commentaries on the fast changing face of China and the rise of consumerism, Zeng remained resolutely inward in his approach, preferring to focus on his own emotions. Soon after moving from Wuhan to the more cosmopolitan Beijing in 1993, the artist started on his seminal Mask series, portraying the well-dressed urbanites hiding their emotions behind white masks. The works exuded a strong sense of solitude and restlessness that mirrored the artist’s own feeling at the time. Disappointingly, the exhibition is presenting only one painting from the series.

Fearing he might be pigeon-holed, the artist started to remove the mask (completely abandoning the series in 2001), and continued with his portraits using his palette knife to create distinct paint traces from the head, moving upward toward the sky as if elevating the sitter’s spirit.

Around 2004, Zeng developed a chaotic-strokes style, sometimes using two hands, even using several brushes at the same time, as he moved toward abstraction in order to “forget skill and become freer” in his expression. While he initially focused on landscapes and nature, he continued to create numerous portraits using that technique with the face of his sitters still recognizable even though sometimes completely obscured by the strokes. On view are his most recent examples reinterpreting self-portraits of Vincent Van Gogh where Zeng seeks to perceive the Dutch artist’s spontaneous emotions. Zeng explains that while abstract landscapes have dominated his practice in the last 15 years, he applies the same mood and concept to his figurative works, pointing out that in traditional Chinese ink painting there was no clear difference between abstraction and figuration.

Zeng has used self-portrait sporadically throughout his career as a reflection of his own progression as an artist, particularly when he feels he has reached a “new stage,” as well as an opportunity to reflect on his own state of mind. 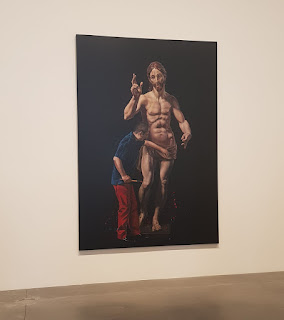 Zeng Fanzhi. In the Studio presents several new self-portraits that will stylistically surprise the viewer. Two portraits present the artist from the back looking at or working on a Renaissance statue (one of them a full length Christ). Coming full-circle with his youth, the artist is using a very realistic technique showcasing his draftsmanship skills (particularly evident in his treatment of folds on his clothing). “This work is really about looking back at my journey, about becoming an artist, 30 years of very hard work, training. I would not have been able to achieve this very high standard of finish 30 years ago, and now I’m very confident about my newfound skills and knowledge,” he says.
In another set of three paintings, Zeng portrays himself with a bowed head to suggest the meditative processes that are intrinsic to his creative process. While the portraits were based on a series of photographs of him, the pose was inspired by a Sushi chef Zeng had observed, who, like the artist, “was extremely concentrated and focused about his work.” Drop of paints have been flicked onto the canvas in a very controlled manner, a new technique the artist has been investigating over the last couple of years. 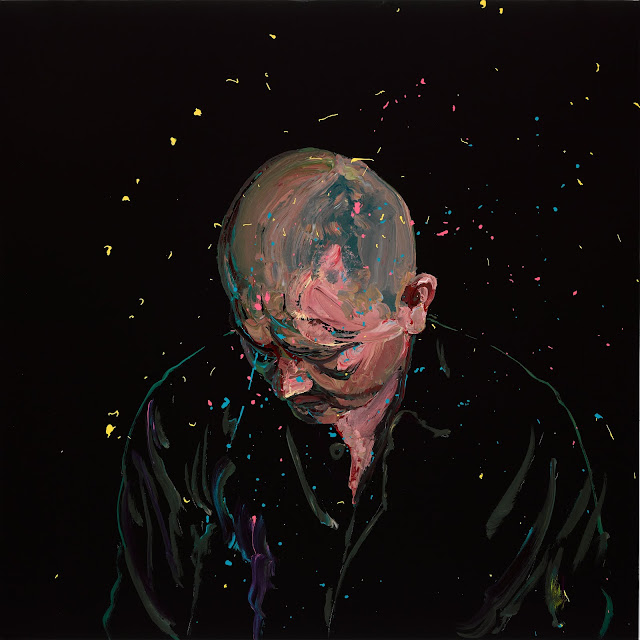 AS FIRST PUBLISHED ON COBOSOCIAL.COM (OCTOBER 4, 2018)