The Problem Solver, an Interview with Moshe Safdie 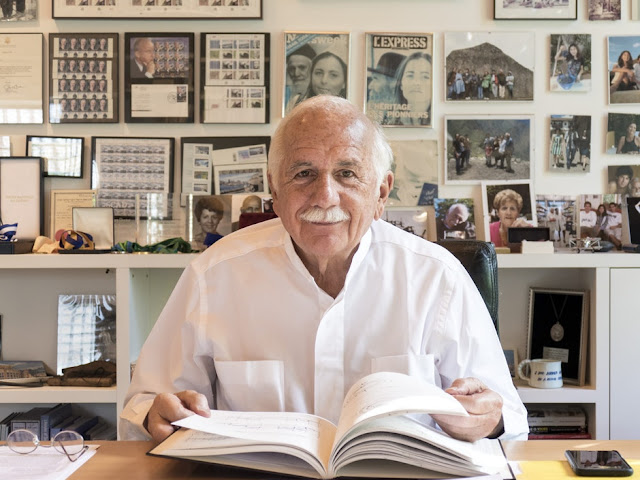 When Moshe Safdie first envisioned his now iconic design for Habitat for the 1967 World's Fair in Montreal as a 1,000-apartment low cost housing complex he was trying to address the need for affordable housing in a rapidly increasing density environment that would still provide a high standard of living including a private outdoor space for each unit.

Reacting against the modernist vision for residential housing proposed by the likes of Le Corbusier — exemplified in La Cité Radieuse in Marseilles, an 18-story slab block that redefined high-density living after the World War II — Safdie reimagined the apartment building as a pile of prefabricated concrete boxes piled like children’s blocks giving it a dramatic stacked profile.

“I arrived in Canada as a very young person, immersed in the optimism of the early years of Israel, and with the experience of communal life, the kibbutz (and) the cooperatives. As a young architect, I was trying to come up with a kind of utopia and the direction I took was very much creating a complex around community life,” he recalls. 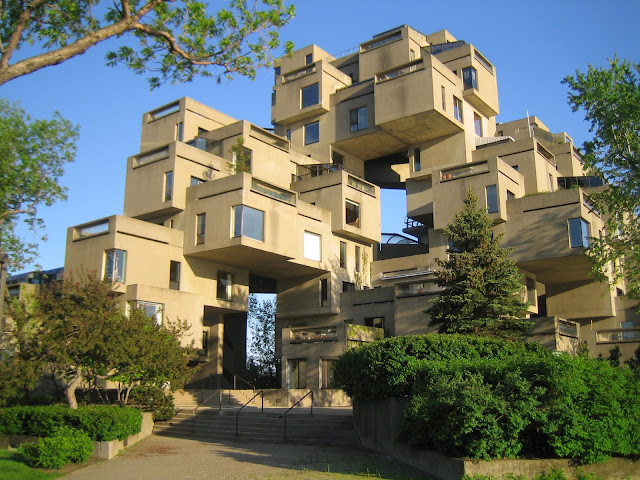 Though the project was ultimately scaled down to 158 units, at that time the idea was still revolutionary, breaking the mould of the extruded aesthetic of high-rise housing, and it earned him a Newsweek cover.

More than 50 years later, the Israeli-Canadian-American architect still faces the same issues, but on a scale and density he never imagined when drawing up the plans for Habitat.

In the last 10 years, Safdie and his team have been revisiting some of the principles of Habitat 67 with large-scale projects throughout Asia that break down the scale of the typical single-tower residential development in order to offer a more humane living environment.

Updating his initial concepts and moving away from pre-fabricated blocks and the utopian ideal of equality, the recent buildings make full use of the latest materials and techniques to also better reflect contemporary realities. “In Habitat 67 the quality of all the apartments was even, everybody had a garden, a terrace, everybody had their own two to three exposures to lights and views. There was a great effort on our part to be equitable. In the new projects, it varies. Maybe a third have a large roof garden, other units have balconies, some are bigger or smaller, there is a great mix, maybe in anticipation of different types of family units, some with kids, some empty nesters and some singles. There is more variation in quality and things to choose from,” he says. 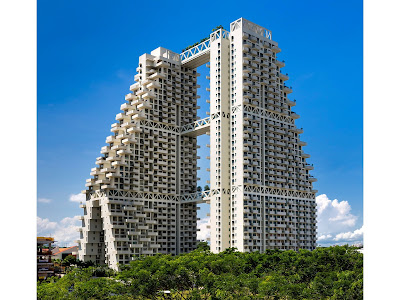 In Singapore for example, Sky Habitat offers 509 apartments, each with its own terrace or balcony, overlooking three bridging sky gardens that link the two stepped towers and also create a series of interconnected streets and public gardens in the air. While in China, Golden Dream Bay, a massive 2,500-unit apartment building responds to a requirement that every unit receive at least three hours of sunlight daily, measured at the winter solstice, with the complex still punctuated by a series of private greenspaces, terraces, and roof decks, inspired by Habitat 67.

Big complexes can of course create big problems but Safdie points out that breaking them up into smaller increments is part of the solution: “If we see a building that is 500 meters long, we feel small and overwhelmed. If we can break it down into smaller parts, it starts feeling more comfortable. If you see a building that creates an asphalt jungle, we feel deprived of light and nature; if we can bring plant life in, we always feel a little better because with plants we feel nature is there. If plants can survive, so can we survive. It is a whole series of elements of well-being that we’re trying to restore in the mega-scale.”

But to live more harmoniously in a mega-city requires clear thinking by urban planners and Safdie believes the planning of cities and districts still remains a “neglected field that really has to be resurrected.” He notes that, “back in the 1920s, most of the avant-garde architects thought of architecture and urban design as inter-related questions. The design of the cities and that of buildings was clearly closely intertwined in their minds. I think when the modernist movement was discredited as having created many failures, there was a counter reaction that you shouldn’t plan at all, you shouldn’t plan big, you should just build incrementally. The trouble is that it’s not the reality; for example, in China they build a city for 2 million people in 5 years. Therefore you must plan, and these plans must have inherent consideration of scale and circulation. They should not impose every detail but be a framework to guide individual buildings. Singapore is one of the few places where a lot of urban design is done ahead of individual buildings, mostly by the URA [the state’s Urban Redevelopment Authority] and its consultants. Dubai has done very little of that; it’s more, ‘let the market take its own course;’. We have been suffering for decades from ‘the market knows best.’ Property developers are driven by speculation on land values, they are driven by zoning, and if there aren’t controls, then it just escalates because everybody is greedy and wants to build as much as they can on their land.”

One central tenet to Safdie’s design philosophy throughout his career has been contextualization and localization: “I’m fascinated by how we, as architects, can try bringing history, heritage, local culture and local lifestyle into a particular architecture where we are designing: in the olden days, if you happen to be building in Scandinavia, you’d build with wood, you would build within your culture, and consider the seasons but now as the world is globalized and we travel and work all over the place, there is a sameness that has taken over, where you have no sense of where you are. Local character is now only found in the older, historical parts of cities, elsewhere you can’t tell whether you are in Shanghai, Johannesburg or Sao Paulo.”

The Boston-based architect believes an architect’s creation “needs to adapt to setting.” He says, “An underlying philosophy to everything that I build is that as architects we are building an environment for society. We create a framework in which we spend our life, therefore we don’t have the luxury to call ourselves artists in the sense that the word is used in Western cultures where the artist is a free-wheeling, independent spirit who can do whatever they see fit. We have a very tight programme of needs, requirements and economics, and we must function within that framework. And if we don’t, we’re not acting as responsible architects. Architecture must address the issues of the day.”

“The underlying social role of the architect is that they are not functioning in a vacuum. They are problem solvers for the society in which they live.” 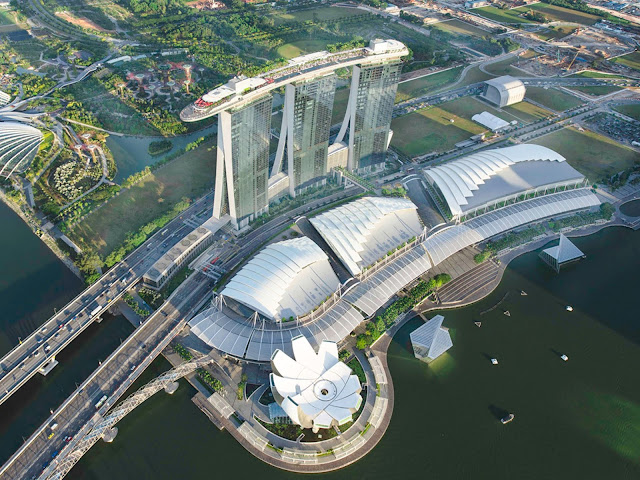 Reflecting this belief Safdie’s design for the Crystal Bridges Museum of American Art in Bentonville, Arkansas, nestled in a steep ravine above a stream and two creek-fed ponds, incorporates laminated Arkansas pine and allows the annual high waters to move through uninterrupted. Elsewhere, the Khalsa Heritage Centre in India was built from local sandstone, rising out of the cliffs.

Safdie refuses to be pigeonholed in a style or movement, but admits there are recurring elements and preoccupations in his designs such as his “interest and obsession with gardens and outdoor spaces, bringing nature into architecture, whether indoors or outdoors. And there is a fascination with certain geometries. When I do structures that are very big, like an airport or museum, there is always a hierarchy of circulation and movement, like a central spine that make it legible, like in the Roman cities the Cardo Maximus (the spinal public thoroughfare that ordered and structured the city). These recur in all the projects regardless of the adaption to materials.”

His designs have evolved over time and reflect particular interests and preoccupations:  “You could say I’ve had different periods: The first 10 years with Habitat 67, the other Habitat designs (which were not built) and my design for the Centre Pompidou (for which he was not retained), were all about modules, repetitive building blocks, prefabrication. The years I started building in Jerusalem, I became very interested in historic context and local materials — in that case stone — topography and generally the Middle East heritage. Then in the 1980s-90s, I was working mostly on major public buildings, like libraries, national museums, courthouses, an institute of peace, in the US where there is a lot of symbolic overtones and issues in these buildings.”

“In the last 20 years, the dominant aspect of my practice has been Asia and the mega-scale, though I’m still working on other projects like a public library in Boise, the National Medal of Honor Museum in Charleston and a hospital in Cartagena.”

Habitat 67 remains close to Safdie’s heart and he has lived in an apartment in the building on and off over many years since the opening of the Expo, raising his children there, before moving to Boston. The building has been designated a heritage site by the Canadian government, and Safdie’s apartment has been designated a heritage interior: Having just finished restoring it to the exact state it was when first built 50 years ago, Safdie is now planning to gift the apartment to a Montreal institution and it will be available to the public to visit.

AS FIRST PUBLISHED IN PRESTIGE (SEPTEMBER 2018)