When art collectors Ryan Su and Adrian Chan were asked by ShanghArt Gallery whether they could support Hu Jieming with his film, little did they know they would become the main protagonists in the Chinese artist’s latest project.

“He asked us if we wouldn’t mind appearing in his film, and I said ‘OK.’” Su recalls adding “We thought it would be an interview and take a day,” For the two avid contemporary art collectors, Hu’s loose creative process was an eye opener.

“There was no script and the project kept on growing and changing,” says Chan. “On the first day of filming we had a brief conversation about the project, but it was all very vague. He told us he wanted to showcase some of the most beautiful and lesser known places in Singapore, because Singapore had to be the focus of the work as it was part of a specific residency programme.” Su says

As avid nature and bird lovers, the pair took the artist on a trek around Mount Faber Hill, where Hu photographed a majestic Tongkat Ali tree that stands tall against a background of condominiums, a mix of nature and urban that reflects perfectly the city-state, notes Su. Tongkak Ali trees are indigenous to Southeast Asia and their roots are well known for their powerful aphrodisiac properties. “Everybody knows about what it is, but nobody has ever seen an actual tree,” Su says with a chuckle.

The collectors then took the artist to row of antique shops in a back road of Turf City, “very old very dirty, full of mosquitoes but we managed to find a good antiques shop (to film in),” Su explains.

Their adventures around Singapore are now part of A Story in Camera, a double-channel video installation that centres on a vintage camera. “The camera is a really magical box and I wanted to explore the relationship between reality and imagination through the camera box,” Hu explains while talking about his installation, which was recently presented at ShanghART. While one film, projected on a large screen, shows two men [played by Su and Chan] as if in a dreamlike sequence exploring a dark jungle as well as a curio shop, another film of Su and Chan going about their daily reality is visible through the viewfinder of the camera.

“The video installation tells a story through two characters whose paths converge under natural circumstances. In contrasting the natural and urban scenery of Singapore by drawing parallels between the forests in nature reserves and the concrete jungle, the short film provokes us to reflect on our sense of existence as we strive to differentiate between what is imagined and what is real,” explains Lilian Wu, gallery director of ShanghART Singapore adding, “The fact that it is screened through a remodelled antique film camera further highlights the complexities between the portrayed, the perceived, and the reality.”

Born in Shanghai in 1957, Hu has spent his career reflecting on notions of time, space, history and memory. “In my lifetime, I’ve experienced different realities. The reality of living under Mao Zedong, as well as the reality of living post-1989, when China opened up to the world and to consumerism. It has been a striking contrast and I think people of my age have had difficulties grappling with these changes,” he says,

The pioneering Chinese digital media artist started his career as an oil painter, but switched to video art after seeing a work by Bill Viola in the early 1990s. Feeling inspired and intrigued by the technology used by the American video artist, Hu bought a computer and started teaching himself to edit. “I was probably the first artist in China to own a computer,” he quips, adding ‘’I think I like the technical aspect of the work. I’ve always been quite good at sciences.”

“Hu has been conceptual from the very start, which really wasn’t popular in those early years. But today, video art is more understood and appreciated and you can find his work in the DSL collection of [French collector] Sylvain Levy and [Indonesian collector] Budi Tek’s collection,” says Wu. 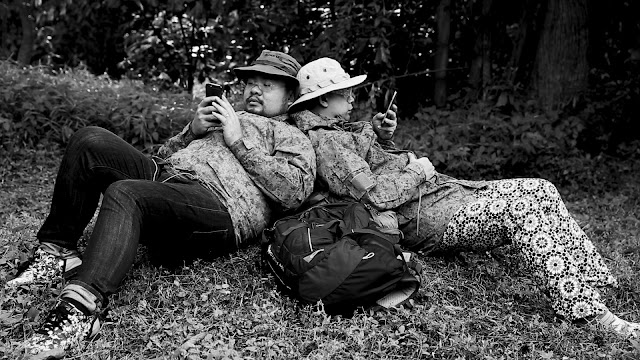 One of his earlier iconic digital works is The Raft of the Medusa, (2000), where Hu pictorially referenced Theodore Gericault’s allegorical 1819 painting of the same title – a depiction of the tragic aftermath of the wrecking of a French frigate with only 15 out of 147 people who had set out on a raft survived. Hu subverted the original work with his own huge digital collage and constructed a raft of Pepsi and Coca Cola bottles, a symbol of American consumerism, while its sail is a red flag (referencing the cultural revolution) and then loaded it with people involved in hedonistic pursuits and violence.

Another of Hu’s iconic conceptual works that draws on his fascination with art history is 100 Years in 1 Minute (2010), a large scale video installation comprising over a thousand storage boxes arranged like a matrix screen, each projecting separate videos that collate art history images, from the screaming pope of Francis Bacon to Yves Klein’s anthropomorphic mono-print painting.

The artist’s latest work, A Story in Camera, was conceived during a residency programme in Singapore organized by ShanghART and supported by the Economic Development Board. His son, multimedia artist Hu Weiyi, was also part of this residency and the pair worked at the same time, though separately, on similar themes that explore the relationships between people and their environment as well as the relationships between reality and imagination, all within Southeast Asian contexts.

“When you’re Chinese you grow up with a certain view of the region,” remarks Hu Weyi, “I had been to big cities in the region, and there aren’t many differences with Shanghai, but the countryside is very different. Not too many Chinese want to go to Myanmar because a lot of people think it’s dangerous; the reality is that it’s very beautiful, (and the) people are quite nice. Life seems to be very slow in some places like Chiang Mai, but you also feel there is a weight on people, a weight of the past.”

Drawing on the power of the past, like his father, the young artist presented this “weight” through a series of photographs showcasing shadows of dangerous instruments (scissors, knives, axes) like beautiful tattoos. “It’s like people have something on their back, they carry a part on their shoulders that you cannot see, it’s just a shadow hiding in daily life,” he remarks.

He adds that he was inspired to follow in the footstep of his father early on. “I literally grew up in his studio, watching him work, and I’ve always liked to draw, and hated studying,” he recalls.